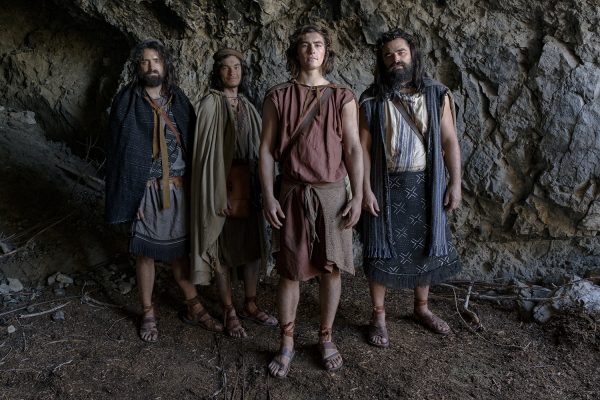 Jackson VanDerwerken isn’t having the average 17-year-old summer. He’s living more than 2,000 miles from his home and portraying a character he’s known since singing “I will go, I will do” as a child — the prophet Nephi.

Similar to the Bible videos detailing the life of Jesus Christ, new videos produced by The Church of Jesus Christ of Latter-day Saints will portray the stories and the people in the Book of Mormon.

The five-year project will create short films depicting somewhere over 60 percent of the Book of Mormon, although Elder LeGrand R. Curtis Jr., General Authority Seventy and chairman of the project’s steering committee, noted in the first year they’ve already chosen to add a scene so it could end up being more.

The first year of filming is focused on producing videos detailing 1 Nephi 1–18. The story begins with Lehi and his family leaving Jerusalem and setting out for the Promised Land. On the journey, he brings his four sons, Laman (Mace Sorensen), Lemuel (Sam Petersen), Sam (Cooper Sutton) and Nephi (VanDerwerken).

A hope for the new Book of Mormon video series is to amplify the meaning of the book, and as the four actors have developed their roles as the sons of Lehi, they’ve found new personal meaning for their characters. 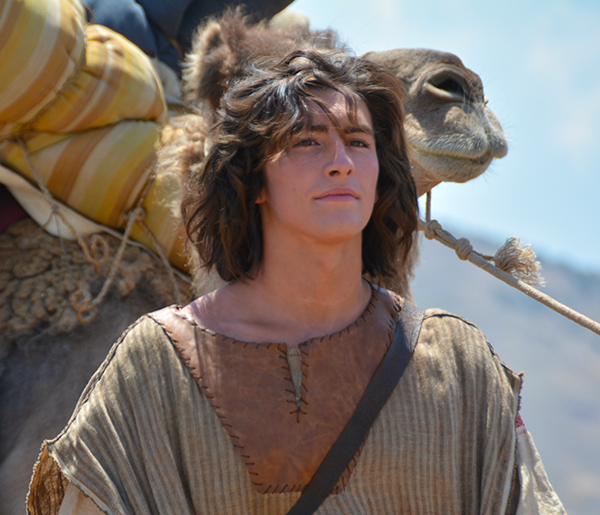 Jackson VanDerwerken is staying with extended family in Utah while he films his role as Nephi for The Book of Mormon videos. He lives in New York. (Photo by Rebecca Lane/UV360)

Although these brothers didn’t know each other prior to a screen test, they now not only act as brothers — they feel like brothers.

“It has really helped develop the pain and anguish that Nephi would go through seeing his brothers chose the wrong and [having them] practically try to kill him several times,” VanDerwerken said. “It kind of crushes his heart and I’m able to feel that.”

Although he is the oldest brother in his real-life family and now portrays the younger brother, VanDerwerken has been able to relate to Nephi.

“Nephi only wrote about the big decisions he made in life,” VanDerwerken said. “He’s just like us. He chose the right at very crucial times in his life which brought him closer to the Lord.”

VanDerwerken never imagined being cast as Nephi. He was selected from a group of 200 auditions. He feels the responsibility to portray the prophet and continue his legacy.

“I hope that I can continue to live up to Nephi and and be an example,” VanDerwerken said.

VanDerwerken plans to serve an LDS mission where he’ll be able to use the videos he’s helped create. 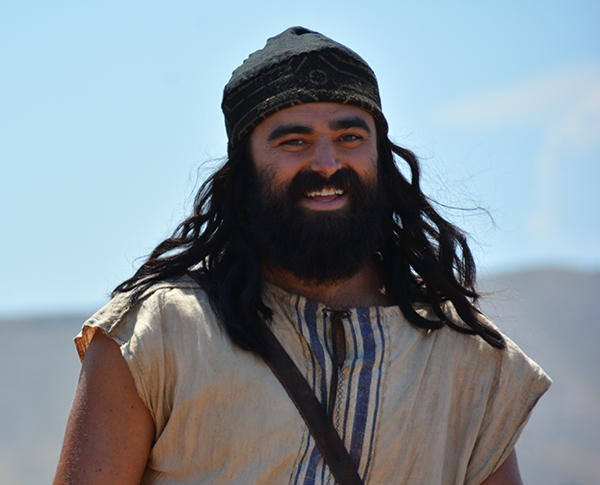 Mace Sorensen, who plays Laman in The Book of Mormon videos, lives in Louisiana. (Photo by Rebecca Lane/UV360)

The Book of Mormon is mostly narrated, but the church wanted the video series to include people who talked.

“We wanted to stay very close to what happened in the Book of Mormon but there are times where you have to make decisions where you are creating dialogue that would fit with the story,” Elder Curtis said.

The addition of dialogue has allowed the actors more freedom to develop the figures they are portraying in the film. For Mace Sorensen, who plays Laman, he looks for opportunities to portray Laman as a likeable character.

“I look for every opportunity to show him as a good, reasonable, normal person,” Sorensen said. “There is plenty of bad stuff that he does to tarnish him, and if you just play him that way, then he’s totally hateable . . . . Hopefully when you watch this you don’t just hate him. You feel pity for him and you want him to succeed even though you know he doesn’t ultimately.”

Sorensen points out, although Laman had the tendency to complain, he stood by his father for quite some time.

“He’s a strong-willed character that has a lot of opinions and he’s passionate,” Sorensen said. “I think he believes everything he’s saying: ‘If we go back and talk to Laban and try to do this we’re going to die and I’m concerned about that because I don’t want to die and because I don’t want anyone else to die,’ which we can all relate to.”

Laman eventually leaves the family, but even his reasoning for that can be relatable.

“Nephi was always meeting the expectations of Lehi and Laman was always falling short so I think there was a lot of animosity that built over the years as they traveled,” Sorensen said. … “Laman eventually got so sick of just being haunted by his brother — never being good enough, never being righteous enough — that he just wanted to get away from it.” 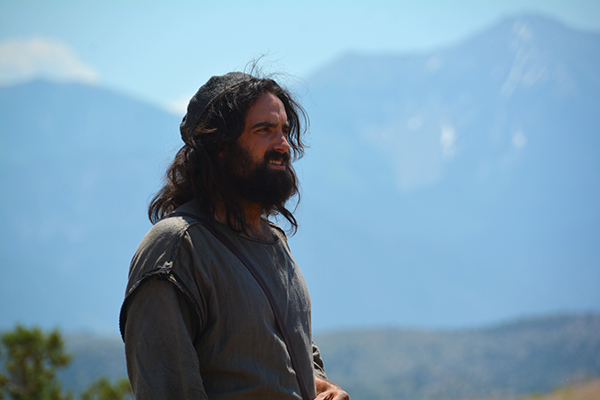 Sam Petersen, who plays Lemuel, hopes to develop Lemuel’s character so that people see him as a separate person from Laman. (Photo by Rebecca Lane/UV360)

Author Nephi always groups Laman and Lemuel together in The Book of Mormon because their actions are the same, but Sam Petersen, who plays Lemuel, wanted to make sure Lemuel was his own character who made his own decisions, not an appendage of Laman.

“I’m trying to show that he’s maybe a little bit softer than Laman,” Petersen said. “There’s moments and opportunities in the film, and hopefully they’ll be shown, where Lemuel thinks a little bit harder before he jumps in with Laman. He’s a little more deliberate and considers his father’s words more. He might look more humble faster when he’s talking to Nephi or when Nephi is explaining something. He might break down a little bit sooner than Laman does.”

The scenes that don’t just stick to the Book of Mormon text have given Petersen the chance to convey this.

“We see them laughing,” Petersen said. “We see them crying. We see them humble and we see these things that we don’t always read about in the Book of Mormon but we’re trying to tell a whole story, a complete story. So I get to do that and in those moments is when I try to show that Lemuel is his own person and is thinking his own things and feeling his own things.” 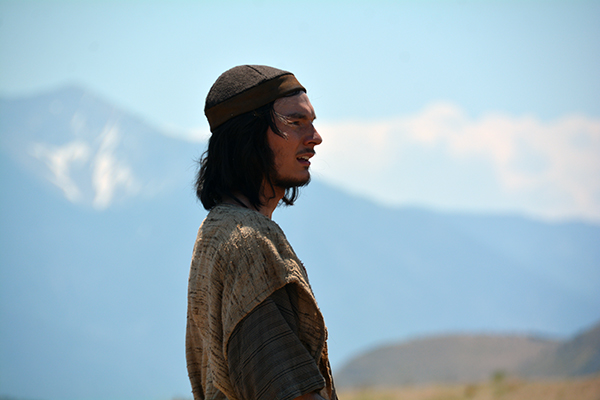 “He causes his father to rejoice and that’s all we need to work for as people,” said Cooper Sutton, who plays Sam. “We don’t need the acknowledgement. We don’t need the verses of our heroism. We just need to know that the people we love and care about are rejoicing because of us and we’re doing the right thing. So Sam is a really nice example of that to me.”

Participating in the project has been an enjoyable experience for Sutton, especially working alongside the brothers.

“From the beginning we all four had a real strong desire to bring this story to life,” Sutton said. “Knowing that we had the same goal helps us enjoy each other’s company and helps us work through the heat or the exhaustion. Any time we get stressed we’re just always there for each other, so I’ve been really blessed to work with these people.”

Of the four brothers, the crew discovered Sutton was the fastest runner while filming the scene where the brothers flee from the guards of Laban.

“They had to pull me back consistently because I was getting too far ahead of them,” Sutton said with a laugh. “It just got to the point where every time we’d run we’d be cracking up because we’d always get separated.”

“I want them to feel human and feel like every other family because this was written for our day,” Torriente-Robey said. “It’s four brothers who are at different places in their spiritual journey and they’re trying to figure out life as they go.”

Sister Reyna I. Aburto, second counselor in the Relief Society General Presidency, said the Book of Mormon is a beautiful account of how God works with his children and hopes these videos will help people feel God’s love.

“It’s going to help us find out who we are, find out our identity but mostly find out what is our mission and our purpose as children of God so we can prepare the way for when (Christ) comes again,” Sister Aburto said.

The first season of the Book of Mormon videos comprising the stories in 1 Nephi 1–18 will be released in the fall of 2018.

All for love and love for all: Provo’s Stephenie Larsen encircles LGBTQ youth Previous post