Finding light and spreading joy in the darkness of mental illness 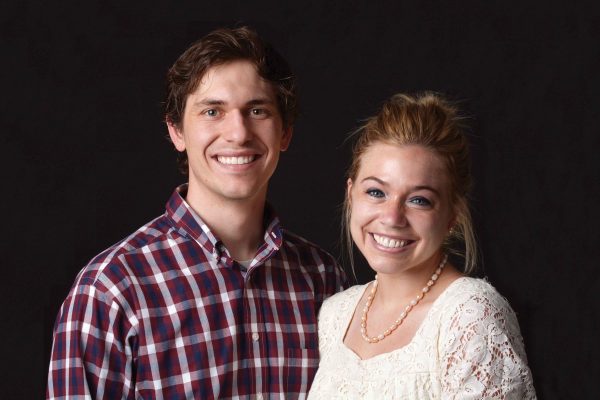 Josie Thompson Solomon and Brighton Solomon run The 444 Project, which gained its name from Josie’s family scripture — Alma 44:4. In the verse, the Lord promises to support, keep and preserve his faithful. (Photo by Dave Blackhurst/UV Mag)

When Josie Thompson Solomon found herself unable to serve an LDS mission because of mental illness, she decided to take a road trip to visit a friend in Farmington. After her visit she headed home to Arizona. When she stopped in Alamosa, Colorado, she picked up a hitchhiker named Nate.

As Josie got to know Nate, she realized he wasn’t the typical guy needing a ride. He was a college graduate with a twinge of hippie. Learning about him made Josie realize everyone has a story and she wanted to learn more. She extended her trip and interviewed 500 people in 30 states. She slept in her car, showered at truck stops and asked each person she interviewed what got them out of bed in the morning — which had been a personal struggle for Josie.

In her sophomore year of college, this former homecoming queen and student body president suddenly had a difficult time starting each day.

“I didn’t know why,” Josie says. “There was nothing circumstantial to describe or explain the enormity of this constant feeling. As I tried to search for a word to properly depict how I was feeling, the only word was ‘dark.’”

She met with a psychiatrist and started her first prescription of what would turn into over 90 prescriptions for antidepressants or antipsychotics. Some would seem to work and then progress would stop. She underwent 11 treatments of electroconvulsive shock therapy. Still Josie found herself enveloped in the darkness.

“I don’t have to be healed to help. It’s been a humbling experience knowing I can use my broken mind to help heal broken hearts.” — Josie Thompson Solomon, The 444 Project

“I made the decision long ago that I would be the girl who shines in darkness and I would use my darkness to bring light to others,” Josie says. “Even if you can’t feel joy you can always create it for others.”

After her cross-country road trip, she returned home to Mesa and began speaking. Her story reached Europe and she received an invitation to re-create the project in Italy.  When she got back to the United States, her next journey led her to her new last name — Solomon.

Brighton Solomon grew up knowing Josie’s family and going to dances at their barn. In 2014, Brighton’s brother called him and told him to take out Josie. He obliged.

“Right off the bat I was nervous as ever to take out this amazing girl, and then she surpassed every expectation,” Brighton says. “I remember going home that night and not being able to sleep because I was so excited about the things Josie and I talked about. It wasn’t a first-date conversation, but we really dug deep into some of the experiences she had.”

Their courtship consisted of turning The 444 Project into a nonprofit and organizing a service project in the Philippines with Revive Service Tours. In the Philippines, Brighton proposed and later the couple eloped to the Las Vegas Temple.

The newlyweds lived in a barn during their first married months until a speaking event in Utah compelled them to move to the Beehive state — jumping from basement to basement before landing in their Springville home.

The two now speak together with Josie addressing the 1 in 4 people who suffer with a mental illness and Brighton speaking to the 3 in 4 who love someone who struggles with mental illness. They’ve spoken at high schools, church congregations, BYU Women’s Conference and Especially for Youth while continuing to do international service projects.

“We believe everyone can find joy in darkness,” Brighton says. “We hope that by sharing our experiences we can give them tools to create that joy.”

The two champion making adversity an adventure. Josie is undergoing aggressive treatment for Lyme disease while Brighton is working to renovate their home. Their mission is to spread joy in darkness.

“I don’t have to be healed to help,” Josie says. “It’s been a humbling experience knowing I can use my broken mind to help heal broken hearts.”

To learn more about or get involved with The 444 Project, visit the444project.com.