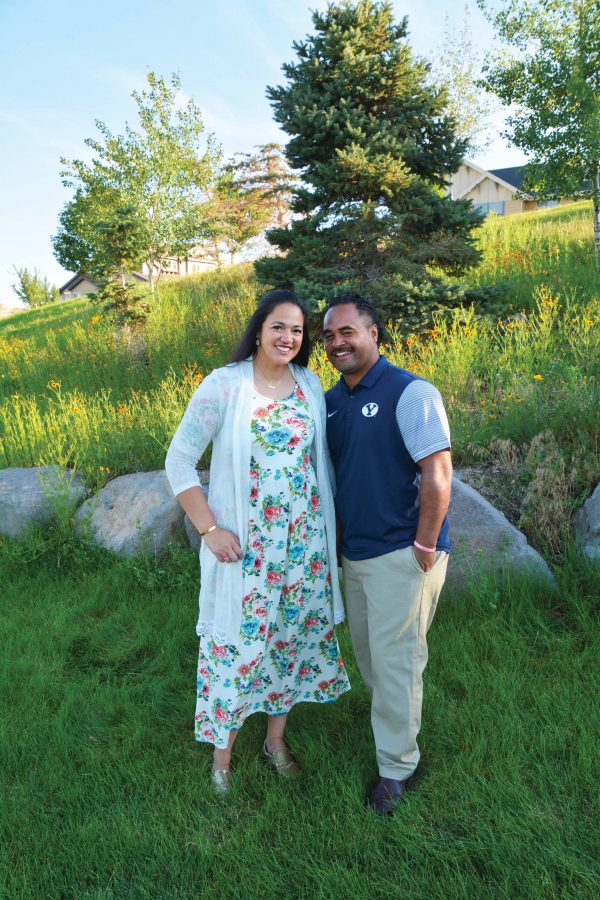 During a quiet moment at the hospital, Sunny asked Reno if he blamed her for what happened to their daughter Elsie.
“He just hugged me tight and said I don’t ever want to you to ask me that again,” Sunny says.
Reno then continued to say they could blame the fact they didn’t get the plantation shutters they wanted but couldn’t afford. They could blame the market crash. They could blame the people who never paid them back.
“Or we could just accept that this was the Lord’s will and feel grateful for the miracles we’ve experienced,” Sunny says.

Elsie Mahe loved the color pink and feared Cosmo the Cougar (she’d cry in the stands if he was on the field). This 3-year-old would mimic her mother who put mousse in her curly hair by doing the same with peanut butter.

Her laughter brought light into the Mahe home, and now when the family goes to sprinkle pink glitter on her grave, they know her legacy sprinkles joy into the lives of others.

It was a normal Tuesday in November. Sunny Mahe was washing the dishes when Elsie’s friend came in and said, “Elsie is hanging from the string.” Knowing her children loved to play, Sunny imagined she would go and untangle her daughter from whatever she had gotten stuck in. But instead the mother of seven found herself performing CPR.

Despite prayers, blessings, faith and fasts over the next week, Elsie didn’t make it.

“I still believe she could have been healed if that had been the Lord’s will for her,” Sunny says. “We were surprisingly calm when the doctors told us. I think most people would say we were in shock, but it was unexplainable. It was a ‘peace that passeth understanding.’ We knew it was OK.” 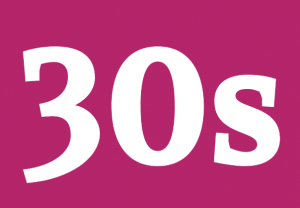 “What I love about being in my 30s is all of the interesting things I’ve learned how to do. I know so much more now than when I was a teenager or in my 20s and I like the person that life is letting me become.”

However, Sunny wondered why she had been able to revive Elsie initially — why her one class of CPR had Elsie breathing again before the paramedics arrived. She found her “why” at the LDS temple when her husband, BYU running backs coach Reno Mahe, suggested organ donation.

“We realized she’s supposed to save other people,” Sunny says. “It’s not a miracle for Elsie, it’s a miracle from Elsie.”

With that answer, the loss became a life-saving miracle for others, and the family found part of the cure for their grief.

“The organ donation was such a source of healing to feel like she would fulfill her time here and aid others in finishing their time on the earth,” Sunny says.

The Mahes shared updates throughout the process on social media and through interviews, garnering attention of national news outlets.

“Not everybody has a whole community that will pray for them when things like this happen,” Sunny says. “It didn’t feel right to say, ‘Everyone pray for us and be concerned — but leave us alone.’ It was more natural to update people and allow others to carry whatever portion of the burden with us.”

Friends and strangers gave and did whatever they could, whether that was fixing Sunny’s broken sink or hanging Christmas lights.

In the Mahes’ desire to give back to the community that supported them, they launched the Miracles from Elsie Foundation with three main focuses: financial support for families experiencing medical crisis, organ donation support and awareness, and grief counseling for families who have lost children or other loved ones. With the foundation, they hope to provide the same care they received.

“There isn’t anything you can do to fix the situation,” Sunny says. “Nothing will bring her back and nothing is going to replace her, but the blessing of knowing you have people who care about you … it still makes me cry thinking about it.” 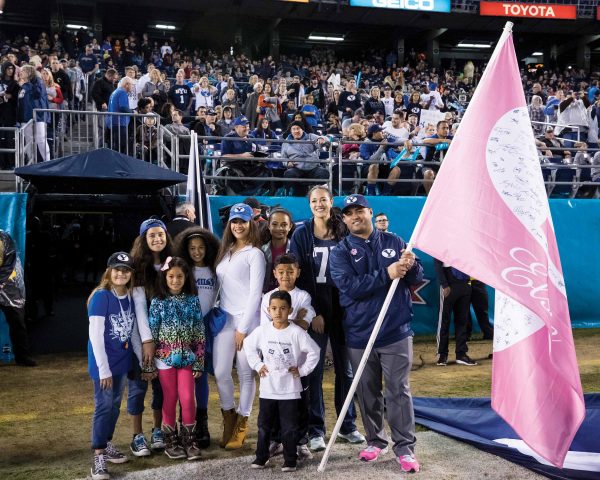 The Mahe Family at the Poinsettia Bowl. (Photo by BYU Photo)

When Reno became the BYU running backs coach, Sunny wanted to make sure the players knew they were part of the family. But having them for dinner wasn’t going to work.

“I wish I was the wife who would invite you to dinner, but I think you’ll find apple cores in my couch,” Sunny jokes.

Instead, Sunny started Cookie Wednesday. Because the middle of the week involves the hardest practices, this coach’s wife sends cookies for the players.

Elsie’s accident happened on a Tuesday, and the next day the running backs showed up at the hospital with cookies for Sunny. The football team also honored the Mahe family before the Poinsettia Bowl with a giant pink flag, signed by the team, in honor of Elsie.

The fine art of living: Sue Bergin shares her wisdom both quietly and loudly Next post