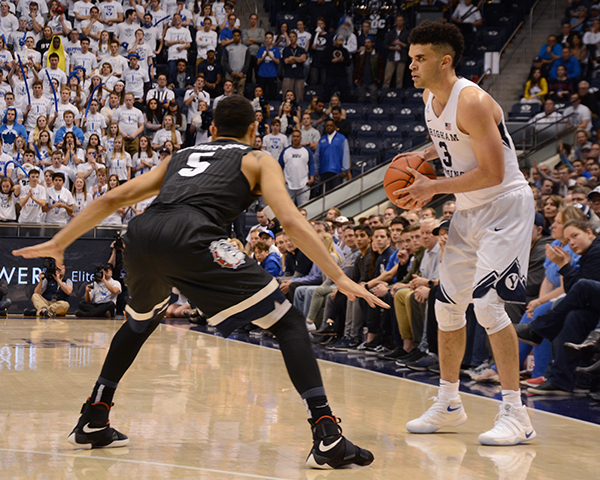 BYU guard Elijah Bryant sets for a play in the Marriott Center. He is one of 10 returning players on BYU’s basketball team for the 2017–18 season. (Photo by Rebecca Lane/UV360)

As part of its nonconference schedule, BYU will play four in-state opponents: Utah, Utah Valley University, Utah State and Weber State. Of these in-state competitions, the Cougars first take on UVU, a team that upset the Cougars last year with a 114–101 Marriott Center victory, in the Crosstown Clash on Nov. 29 at the UCCU Center.

The Cougars then take the short trip to Logan, Utah on Dec. 2 to play Utah State. A week later, BYU meets Weber State in the first ever Beehive Classic, which features the four Utah teams BYU will play during the season at the Vivint Smart Home Arena.

Then on Dec. 16 the Deseret Duel returns to Provo after a one-year hiatus. BYU leads the all-time series 129–128.

Outside of Utah, the Cougars will participate in the Barclay’s Center Classic where they will play both Alabama and UMass.

Per usual, the Cougars will open its preseason with the annual Cougar Tipoff on Oct. 25, and continue with back-to-back Wednesday exhibition games, Nov. 1 (Westminster) and Nov. 8 (Colorado College). See the entire nonconference schedule below.