In case you took a break from the news this weekend, here are the top local news stories.

Saratoga Spring’s Brandon Foster submitted “smoked gouda and honey” to the “Do Us a Flavor” contest, presented by PepsiCo Frito Lays, reported The Daily Herald. Foster’s flavor has made it to the top ten finalists. View his introduction video here. Foster has won $10,000 from his top ten ranking, but he will receive $1 million if he wins the grand title.

Provo Mayor John Curtis has raised the most campaign money out of the three men running in the 3rd Congressional District primary, reported the Deseret News. Curtis has raised $132,468 and contributed $100,000 of loan money himself to make his funding total $232,468. Curtis’s opponents Tanner Ainge and Chris Herrod have raised $130,833 and $79,446 respectively for their campaigns.

BYU freshman Kelton Hirsch won the Utah State Amateur golf competition held in Ogden, reported by the Deseret News. The 21-year-old from Centerville redshirted for BYU this past season after returning from an LDS mission in Mexico City. Hirsch will compete on the BYU golf team in the fall.

Wildfires in Alpine cause temporary evacuations 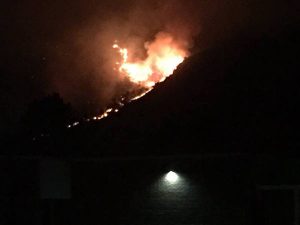 Early Sunday morning, Highland City fire officials evacuated 25 homes due to wildfire, reported the Deseret News. As of 8 p.m. Sunday, fire officials had the wildfire 25 percent contained, and 100 personnel had assisted with the fire according to the fact sheet published on the Highland City Facebook page. Highland City calls this wildfire the Water Tower Fire.

New association made for LDS educators

The LDS Educators Association met for their first conference on Brigham Young University campus Saturday, reported the Deseret News. This new association is for educators who are members of the Church of Jesus Christ of Latter-day Saints to come and discuss the link between their faith and occupation.