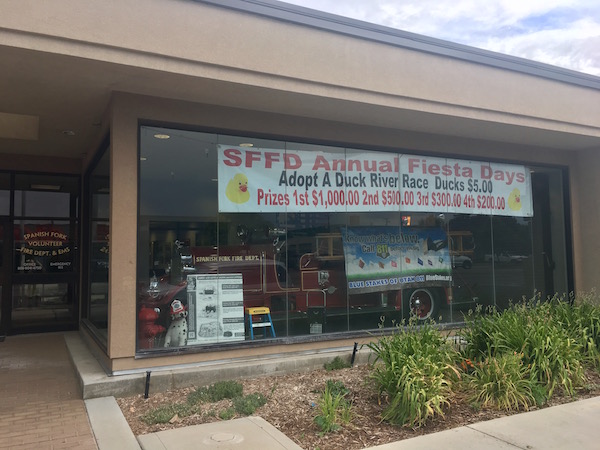 A Spanish Fork rubber ducky will win $1,000 for its adoptive parent. That’s one lucky duck.

“We give more money away than we take,” said Brent Jarvis, Spanish Fork Fire Chief.

The fire department sells 2,000 ducks for the big fundraiser, and anyone can enter by purchasing a rubber duck for $5. The adoptive parent of the fastest duck wins $1,000. The second, third and fourth place ducks win $500, $300 and $200 respectively for their adoptive parents. The last duck to complete the race wins $100.

Ducks race from the Main Street Bride to the West Park River Bridge in Spanish Fork. Along the way, firefighters watch the ducks and help the ones caught in brambles and thickets. “‘Duck herders’ is what we call them,” Jarvis said.

Children ages 12 and under can enter the smaller duck race by purchasing a $1 duck. This race begins at 2 p.m. as well, but it finishes earlier than the big race.

For the children’s race, ducks begin at the Sports Park footbridge and float to the catch basin downstream. The first place duck receives a grand cash prize, but other random duck contestants will win prizes as well.

The purpose of this race is to give children the opportunity to make some money as opposed to raising money for other charity events, says Jarvis.

How to adopt a duck

Winners do not have to attend the race to win. In fact, those who wish to adopt a rubber floating friend may invest in a duck now. Duck sales began July 1. Potential ducky parents may adopt at a variety of places and times:

After the prize money is distributed from both races, the fire department has about $4,000 dollars left to help the community. At Christmastime, the fire department uses most of the Adopt-a-Duck funds to help Spanish Fork families who are behind on utility bills. The firefighters bring the money to the city office in November and let the city distribute it to the families who need it most, so it’s anonymous, says Jarvis.

For 13 years, the Spanish Fork firefighter community has hosted the Adopt-a-Duck race, but the fire department has given service and organized fundraisers for about 108 years.

“It’s a tradition that we have always supported the community,” Jarvis said.

Adopt-a-Duck is a part of Spanish Fork’s Fiesta Days, which runs from July 15-31. Some favorite activities of Fiesta Days include:

For a full calendar of events, visit the Spanish Fork city website.

5 tips for adjusting to life after missionary service Next post