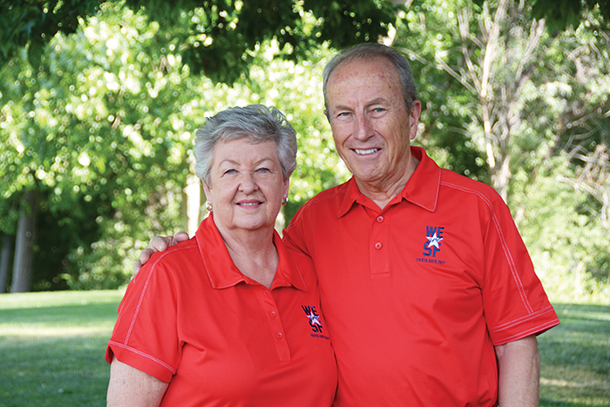 Loa and Leonard Ellis are the grand marshals of the Fiesta Days Grand Parade on Monday, June 24, 2017.

Loa Ellis has always had an appreciation for the Fiesta Days celebration. In fact, her father, Thomas Beckstrom, and her brothers were members of the Diamond Fork Riding Club, so she grew up with rodeo.

“Rodeo is what we did,” she says. “I would go with my mom and dad and brothers every night.”

It’s one of those early-life memories of growing up in Spanish Fork that has made the area special for the Fiesta Day grand marshals Leonard and Loa Ellis.

The pair met while attending Spanish Fork High School. Leonard graduated in 1959 and began active duty as a member of the Spanish Fork 145th Artillery unit three days after graduation.

“The military was a great experience,” Leonard says. “I learned discipline and I learned to appreciate home even more. I still keep in contact with some of those people I served with.”

Shortly after Loa’s high school graduation in 1961, the couple married. In 1964, Leonard graduated from BYU with a bachelor’s degree in accounting and the family moved to New Mexico — the only time they wouldn’t call Spanish Fork home until they served two LDS Church missions together later in life.

“It was an opportunity to work with a large, national firm, but we were excited to come back to Spanish Fork,” Leonard says.

“We are blessed to live here. You can go to Switzerland and not get a view like we have right here in our backyard. There’s something special about living here.” — Leonard Ellis, Fiesta Days Parade Grand Marshal

In 1965, the family moved back to Spanish Fork and Leonard began work on an MBA and CPA. After earning the advanced schooling degrees and spending some time in the management training program for U.S. Steel at the Geneva plant, Leonard purchased a Spanish Fork-based accounting firm and ran Ellis & Company from 1969 until selling the firm in 1983. Loa stayed on at the firm for another 15 years as an accountant until the couple began working with Loa’s brothers as partners in Interwest Mechanical.

In his early business years, Leonard was heavily involved in the Jaycees organization, serving as the local chapter president. He worked with the organization to sponsor the Junior Miss pageant, organize Easter Egg hunts, established a “Big Brother” program to assist disadvantaged boys, built parade floats and sold honey to raise money for mental health education and treatment.

“A lot of great men were part of that organization,” Leonard says. “I learned a lot about community service and leadership during my time in the Jaycees.”

Loa was an active participant with the Jaycees Wives organization and appreciated the chance to serve others and make life-long friendships.

Leonard also served as the president of the Spanish Fork Chamber of Commerce and valued his time as a business owner in town.

In 1987, Leonard was elected Utah County treasurer. He was elected three times and served in the position for 12 years.

The couple has also served two full-time missions together, one to Tokyo and another to London.

Leonard and Loa are excited to be the grand marshals for the 2017 Fiesta Days celebration and appreciate what the associated activities do for the spirit of community.

“We are grateful for the people here and feel honored to be the grand marshals,” Leonard says. “We are blessed to live here. You can go to Switzerland and not get a view like we have right here in our backyard. There’s something special about living here.”

Modern pioneers: 3 countries where first-generation Saints are thriving Next post