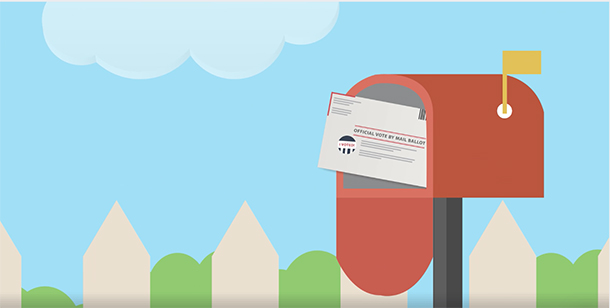 Mail-in ballots for the primary election should be mailed no later than Aug. 14, 2017. (Image courtesy of Utah Association of Counties)

Voters in Utah County won’t have to make time to get to a polling place on Primary Election Day — or on Election Day in November. That’s Utah County is delivering their ballots via the mail this year.

Elections officials mailed ballots on Tuesday (July 25), so every eligible voter should have one in hand by the end of the week. So what should you do with your ballot? What if you didn’t get one? And what’s so great about vote-by-mail, anyway?

You’ve got a ballot, now what?

Once you get your ballot in the mail, you’re free to fill it out immediately and drop it in the mail. Or do some more research on the candidates, and get it postmarked and in the mail the day before the election, or Aug. 14 for the primary election.

One of the comments that Orem officials got after its vote-by-mail election in 2015 was that people liked having some extra time to research candidates and issues on the ballot — while having the ballot in hand, said Steven Downs, Orem spokesman. Sometimes people show up to the polls and don’t realize how many issues or races are on the ballot. They end up voting blindly or skipping those races. When they get a ballot in the mail, they have time to look up resources, like an “open book test.”

If you forget to get your ballot in the mail by Aug. 14, you can put it in a secure drop box at the Utah County Elections Office (100 E. Center St. in Provo) or at your city offices. On Election Day (primary and general) there will be Voter Service Centers open in cities, where you can fill out a provisional ballot if you lost your mail-in one, or drop off your completed mail-in ballot. If you need to do a provisional ballot, you must have a state-issued ID card or two documents that show your current address.

Check out a how-to video here.

You didn’t get a ballot!

If you didn’t get a ballot, there could be several reasons.

• You’re not a Republican. Though municipal races are non-partisan, the race to replace Chaffetz is for Republicans only. So if you live in the 3rd Congressional District, you’ve got to be a Republican to get a ballot for that race. There’s still time to become a Republican, but only if you’re currently unaffiliated with a political party — this can be done on Election Day. The deadline to change from another party was July 17.

Why vote by mail?

When you vote by mail, you don’t get a sticker to show everyone that you voted. And a lot of people love those stickers. But significantly more people participate in elections when they can mail in their ballots.

This year, Orem officials are expecting an even bigger voter turnout because of the congressional election on the ballot. In the last comparable primary election, the city had 17.5 percent turnout. “We hope to see turnout double or greater, to 35 to 50 percent,” Downs said.

One of the concerns of vote by mail is possible fraud. But that hasn’t been the experience in Orem, he said. The signature on each ballot is compared to the signature on file for the voter. If it doesn’t match, someone calls the voter to verify. In one of the few cases where the signature didn’t match, a woman had signed a ballot for her husband.

“It gives us opportunities for a lot of checks and balances,” Downs said.

Voting by mail is as simple as taking the ballot out of the envelope, filling it out and mailing it in. “We want to make it as easy as possible,” he said.