Home LDS Being LDS The conference talk that changed my life

The conference talk that changed my life 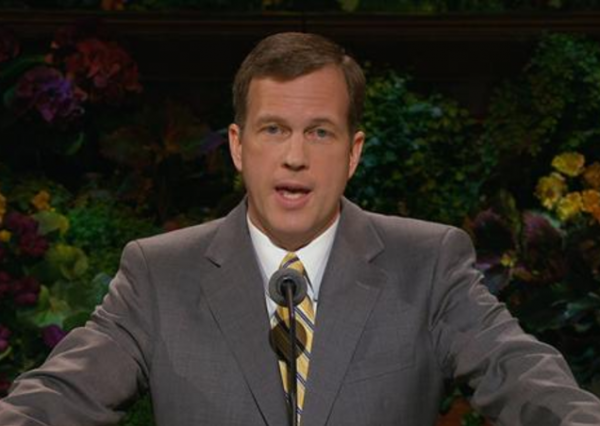 General conferences of The Church of Jesus Christ of Latter-day Saints are meant to inspire and uplift people around the world. Addresses teach doctrine, give council, provide encouragement, and uplift listeners. And sometimes a talk even changes someone’s life.

A few Church members responded to an informal survey about which conference talks were game-changers for them. Among those listed were:

“Approaching the Throne of God With Confidence” by Elder Jörg Klebingat was mentioned by three different people. Here’s what one of them had to say, as well as two other stories about how other talks shaped lives.

1. “Approaching the Throne of God With Confidence” by Elder Jörg Klebingat

Danielle Hart, a faithful mother and Church member, says she comes back to this talk once a year. After battling anxiety and depression that came and went for several years, Danielle came to general conference ready to learn something that could help her manage the stress of life’s challenges and help her feel God’s love.

“While several talks have led to monumental promptings, the ones that have stayed the longest and strongest through the years come from studying Elder Klebingat’s talk ‘Approaching the Throne of God with Confidence,'” she says. “I have reviewed his candid and inspired list at least once a year and the Spirit has always whispered undeniable truths of just what little, significant adjustments could make all the difference.

“It has set me on a quest to understand and appreciate my agency as well as better respect the agency of others. … Sometimes I get a prompting to deepen my improvements in a certain area. Other times I get a loving rebuke. But even when I’ve been in the midst of a bad day or week, I can study his talk and feel the warmth of God’s love seeping in through the cracks of a broken heart. In studying Elder Klebingat’s talk, I have come to know for myself what President Russell M. Nelson truly taught, ‘We can feel joy even while having a bad day, a bad week, or even a bad year!'”

2. “Personal Worthiness to Exercise the Priesthood” by Gordon B. Hinckley

“When this talk was given, I had just received the Melchizedek priesthood and was ordained an elder,” he says. “I had a mission call in my hands. I was in the Conference Center when President Hinkley delivered that talk. The Spirit through his words helped me understand the nature and responsibility of the priesthood. It’s when I really began to understand the mantle of the president of the Church. I was struck by how grave a sin it is to dishonor the priesthood. And, as a convert, it was the first time I realized that there was a male-on-female abuse issue in the Church. Today, that talk is what comes into my mind whenever I think about my priesthood responsibilities. It’s what I use to measure my behavior with my wife.

“Furthermore, growing up in Portland, Oregon, I’ve always considered myself a feminist. And I was glad to see that the Lord thought no less of women than men. And, I began to understand a little better the servitude men are supposed to enter into when they receive the priesthood.”

3. “Why Are We Members of the Only True Church?” Elder Enrique R. Falabella

Devon Marrott says Elder Enrique R. Falabella’s address “Why Are We Members of the Only True Church?” not only changed his life but also enabled him to serve a full-time mission. He entered the MTC in Preston, England, in September 2007, and loved everything about the MTC. He believed that a mission was going to be the best decision he had ever made. And then he entered the mission field.

“I realized how unprepared I was and how difficult this was going to be for me,” he says. “I had a great trainer, I lived with a strong member family, and I had a fantastic ward with amazing people. But I experienced a significant culture shock. I was no longer in my sheltered bubble of Rexburg, Idaho, but was in the streets of Dunstable, England. I was rejected, mocked, literally spit on, had rocks thrown at me, and my beliefs were challenged by people who had convictions of their own. I hated waking up each morning and doing the same thing over and over again. I didn’t want to do this work another minute, but I realized that I still had almost two more years of it. I wanted to go home — the thought of going home was the only thing that brought me any relief.

“However, I had a testimony of my own. My commitment was to Christ. After all He did for me, the least thing I could do is share the gospel with the people of England. But I was so miserable and anxious that I couldn’t preach his gospel to my fullest capacity.

“Then, the October 2007 general conference arrived. I had always been taught to prepare for general conference by going with particular questions. I definitely had one: ‘How can I get rid of these feelings so I can serve a full-time mission?’ Never in my entire life had I paid so much attention to every word that came out of every speakers’ mouth. Finally, Elder Enrique R. Falabella gave his address titled, “Why Are We Members of the Only True Church?” He spoke of how we receive our own personal testimonies and [how we should pray]. …

“As cheesy as this may sound, I felt like Lehi when he stepped outside of his tent and saw the Liahona placed at his feet. I knew exactly what I needed to do. When we got home, I told my companion that I needed to pray and that I needed just a few moments of privacy. [I followed the steps Elder Falabella outlined.] After my prayer, I waited. I sat in silence for probably 10 minutes. I was waiting and waiting and waiting. Nothing came. I wasn’t sure what to do. After realizing I had probably been in that room for probably over half an hour, I decided I was going to rejoin my companion.

“As soon as I started to stand up, I felt something that I had never felt before. It was as if while I was standing up, my stress, sorrow, and anxiety were glued to the floor. When both of my feet were on the floor, I felt calm, confident, and capable to actually find joy in the work that I was doing. I was not homesick that way for the rest of my mission. I look back on those two years with some of the best memories and experiences I have ever had. I love England. I love the people. And I can say, after that night of prayer, that I genuinely loved my mission.”

Coming and going: Movies and shows on Netflix in August 2017 Next post