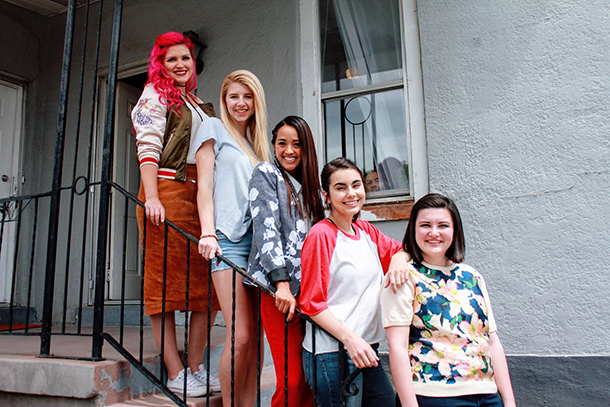 Tween and teenage girls dreamed of having friendships that would mirror the affection and camaraderie found in “The Baby-Sitters Club.” And a group of Utah women are capturing that daydream in a fan-made YouTube series.

Apple Juice Productions — a YouTube channel made “for fangirls, by fangirls” — is recapturing the loyal friendships in a where-are-they-now series, “Stoneybrook Revisited.”

Between 1986 and 1999, Scholastic published 131 books in “The Baby-Sitter’s Club” series. The series follows a group of teenage girls living in the fictional town of Stoneybrook, Connecticut. Together the girls create a babysitting business. “Stoneybrook Revisited” catches up with five of these sitters: Kristy Kilbourne-Thomas, Claudia Kishi, Mary Anne Spier, Stacey McGill and Dawn Schafer.

“It was like catching up with old friends,” said Sarai Davila, who plays the club’s founder and president Kristy Kilbourne-Thomas. “To me it felt like all of their future stories were so fitting. When you read that much about a character when you are young, you feel like you are growing up with those characters. It felt like I was catching up with people I hadn’t seen in a long time.”

Davila, a senior studying English at BYU, remembers purchasing 50 cent copies of “The Baby-Sitters Club” books at Goodwill and estimates she read around half of the books growing up.

“I think there is something really comforting about revisiting something you loved so much as a kid,” Davilia said. “Being an adult can be so hard sometimes. It’s hard to get attached and sentimental about things you are experiencing as an adult. As a kid, it’s easier to get attached. The nostalgia is really nice.” 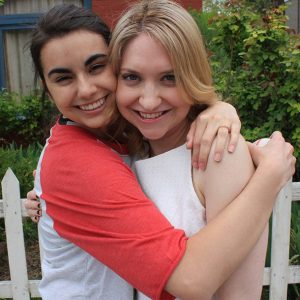 Writer and director Amanda Taylor (left) also makes a brief cameo in “Stoneybrook Revisited” as former club member Shannon Kilbourne-Thomas. Speaking on a chance to make a fan film about “The Baby-Sitter’s Club,” Taylor said, “It combined two of my longtime dreams where I wanted to have this group of people who were organized and doing something productive.”

Hannah Bayles, who plays former club treasurer Stacey, was also a fan of the book series. In fact, she says all of the cast members were fans, which helps them capture the love of the characters in the videos. And the stage actor, who played Ariel in last year’s production of “The Little Mermaid” at the SCERA, was able to demonstrate her love in a new way as this was her first time doing film.

“With film you can do a lot more nuanced emotions that you wouldn’t really be able to see on a stage,” Bayles said. “I really enjoyed that.”

In setting out to create this YouTube series, these women created a club of their own that could parallel the girls in the book.

“In the series, Kristy is really the one who takes charge and organizes everything, but at the same time all the babysitters work together throughout the process,” Bayles said.… “Amanda (Taylor) and Kailee (Brown) really took charge of the project, but at the same time were really receptive to people’s ideas and I thought that was amazing, so in that way it was like ‘The Baby-Sitter’s Club.’”

Taylor, Brown and Chelsey Saatkamp — the so named Kristys — started Apple Juice Productions in 2016. They began with a modern-day Jane Austen adaptation. Following a vlog format, “The Cate Morland Chronicles” — based off of the gothic romance “Northanger Abbey” — became a fangirl’s fantasy.

“I started doing YouTube videos because I was working at a job that wasn’t giving me a creative outlet, and I watched a lot of YouTube,” Taylor said.

Despite living in different states, the group of women began discussing approaches to launch a career in a industry lacking in women. In 2016, just 7 percent of all directors for the top 250 films were women, according to hollywoodreporter.com.

So Apple Juice Productions set out to have a production nearly 100 percent comprised of women. Besides the two small roles played by men, “The Babysitters Club” is written, produced, directed and acted by women.

“Because we can. That’s the bonus of having your own company and owning it all,” Taylor said. “It’s important to me personally. … It brings a lot of camaraderie right off the bat.”

Besides “The Cate Morland Chronicles” and “Stoneybrook Revisited,” the group has also produced a Harry Potter fan film, “Lily Evans and the Eleventh Hour,” and has plans to continue creating films. And, for now, the filming focus will continue to stay in Utah.

“We just had a lot of good support so far,”said Taylor, who wrote and directed “Stoneybrook Revisited.” “We’ve been able to find enthusiastic hobbyists that are very talented.”

And through all the hard work, Taylor is encouraged by the progress she has seen.

“When we look at it, I see how far we’ve come in starting the ‘Cate Morland Chronicles’ and now we have this project where we look like we know what we are doing,” Taylor said. “I’m very proud of it.”

“Stoneybrook Revisited” is a six-video series filmed in Salt Lake. Five videos re-introduce the former sitters in their individual lives while the sixth “Super Special” reunites the girls in the fictional town in Connecticut. Watch the series here.

Utah-Tube: Utah couple 'Goes the Distance' with 'Moana' and 'Hercules' mashup Next post