Home Sports BYU How will Tanner Mangum run BYU’s offense in 2017 vs his freshman season?

How will Tanner Mangum run BYU’s offense in 2017 vs his freshman season? 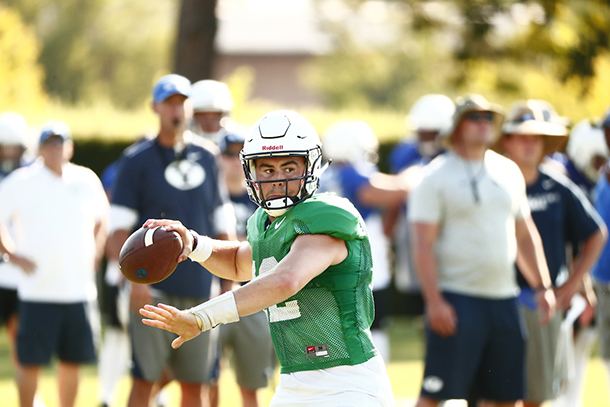 No mystery surrounds what Tanner Mangum can do for BYU. Mangum is not going through fall camp as a typical quarterback climbing the ladder from backup to starter. He has already been down this path once before.

Mangum got thrown into the fire fresh off his mission in 2015. He took over as the starting quarterback after Taysom Hill suffered a season-ending foot injury in the season opener at Nebraska. BYU fans got a tantalizing glimpse at Mangum’s potential in that first game when he led the Cougars to a 33–28 win over the Cornhuskers by completing a Hail Mary pass to Mitch Mathews on the game’s final play.

Fast forward two years and Mangum is no longer a freshman just trying to get acclimated to football again. He is a junior who is well-versed in Ty Detmer’s playbook and trusts in his own ability to bring those plays to life.

“I’m confident in my skills,” Mangum said. “I feel like I could play in multiple offenses. It doesn’t really matter to me. But I do enjoy Coach Detmer’s offense a lot. His schemes and the way he coaches them — it helps me a lot and it’s advanced my game.”

“I’m confident in my skills. … I do enjoy Coach Detmer’s offense a lot. His schemes and the way he coaches them — it helps me a lot and it’s advanced my game.” — Tanner Mangum, BYU quarterback

One significant question connected to Mangum is how will BYU’s offense look this season with him at the controls again. Mangum set himself apart as a skilled passer during his freshman season, but he also ran a much different scheme the first time around.

Under former offensive coordinator Robert Anae, Mangum became versed in “Go fast, go hard” spread concepts. The goal was to unload as many plays as possible in a short time to wear down a defense. The pro-style west coast offense that Detmer installed espouses a much different philosophy. Now the focus is on clock management, ball control and methodically picking apart defenses through timing and accuracy.

Mangum spent last season backing up Hill and soaking in this new offensive philosophy on the sidelines. His BYU coaches are convinced it will pay off for him in 2017.

“His leadership has come through this off-season,” Detmer said. “You can see it out there. The confidence in the huddle that he has being the guy and knowing that he’s the guy and this is his team. It’s night and day different for him.”

A look back at what Mangum did during his freshman season offers a good idea of what he can do in an offense more tailored to his specific quarterback skills. After taking over for Hill, Mangum started the remaining 12 games. He threw for 3,377 yards, 23 touchdowns and only 10 interceptions while completing 59.9 percent of his passes. 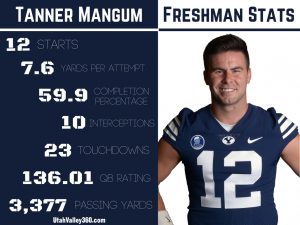 Mangum showed a penchant for moving the chains with his arm: 138 of his 446 completed passes (31 percent) resulted in a first down. Also, 66 of his passes (15 percent) were chunk plays that went for 15 yards or longer.

What it reveals is that while Mangum can air it out over long distance, he does most of his damage inside of 15 yards. This could mean that two traditional staples in great BYU passing attacks from years past — tight ends and running backs — could see a big resurgence in impact and importance in 2017.

Mangum is also effective at spreading the ball around. BYU had five different players in 2015 tally at least 400 receiving yards — led by 737 yards and 11 touchdowns from Mathews.

We’re further ahead than we were last year and, obviously, him being more familiar with the offense and being under Coach Detmer for another year has helped out,” Sitake said. “I hope that helps us out in the season. But I think that he feels he’s in a different spot now than last year and definitely than he was in the spring.”

For Mangum, the key difference between this season and the previous ones is that he doesn’t have to worry about looking over his shoulder. He is no longer Hill’s understudy. There is no battle with other quarterbacks to earn the starting job.

Mangum has already proven himself enough to be handed the keys to the offense. He’s had a full off-season to physically and mentally prepare to be a starter and it has made a huge difference for him to know he is the guy who will lead BYU’s offense in 2017.

“It just gives you that freedom,” Mangum said. “It gives you that confidence to go out and play your game. It’s been a huge off-season for me. I’ve been working really hard. A lot of us have on the team. So now to be able to come out here and put it on the field is exciting.”