SCERA brings a taste of Scotland to Utah County with ‘Brigadoon’ 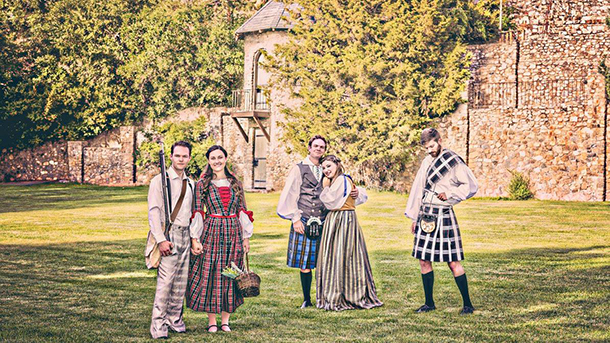 Over the mountains and through the mist a mysterious town called Brigadoon appears once every 100 years. And instead of landing in Scotland this time around, the city is landing in Orem, Utah at the SCERA.

Director Jerry Elison once again returns a classic to the stage with this musical that opened on Broadway in 1947. “Brigadoon” tells the story of two American tourists on a hunting trip in the Highlands. They stumble upon Brigadoon during its rare 24-hour appearance where one of the men falls in love and must choose between his high-riding New York City life and love. And despite the musical being relatively unknown, the SCERA’s production is sticking to the script.

“We’ve done it like it’s written,” Elison, who has directed “Brigadoon” four times, said. “Of course, we’ve had the costumes that are very beautiful and the set design is lovely. To make the city appear is the most different I’ve ever done it.”

As Elison has put the show together, he’s ran into challenges. One of which is his young cast didn’t know the musical.

“We had a good number of kids try out,” Elison said. “When they find out what the show is and they’ve done a little research themselves, they find out the story and they are interested. They come because they like to perform.” 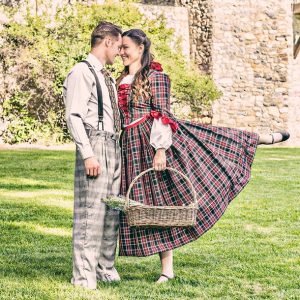 “Brigadoon” tells the story of two American tourists on a hunting trip in the Highlands. They stumble upon Brigadoon during its rare 24-hour appearance where one of the men falls in love and must choose between his high-riding New York City life and love. (Photo by Rachael Gibson)

Then many people were missing rehearsal, sometimes as many as 10 people in one night.

“It’s hard to do a show in the summer because people are gone on vacation,” Elison said. “It is hard to block things when people aren’t there.”

In an effort to keep the musical authentic to Scottish culture, Elison invited native Scots to help the actors with proper Scottish diction. While the natives were invited to help at one rehearsal, the two stuck around longer on their own accord.

“We’ve had a few people from Scotland who have taken a real interest in the show,” Elison said. “They’ve just stayed and come almost every single night.”

Besides helping capture the Scottish accent, the two assisted with teaching the proper technique for sword dancing.

Another aspect Elison added in order to keep the musical authentic, was live bagpipes. While the show is scored for a full orchestra, Elison thinks there is something special about having live bagpipes as part of the show.

“You know how penetrating and dramatic that sound is and especially when they play that sad funeral music,” Elison said. “It’s effective I think.”

“Brigadoon” opens on Friday, Aug. 4, and runs through Saturday, Aug. 19. The 8 p.m. show plays on Mondays, Tuesdays, Thursdays, Fridays and Saturdays. Tickets range in price from $12–$16 for adults and $10–$14 for children, seniors and students. Learn more at scera.org.