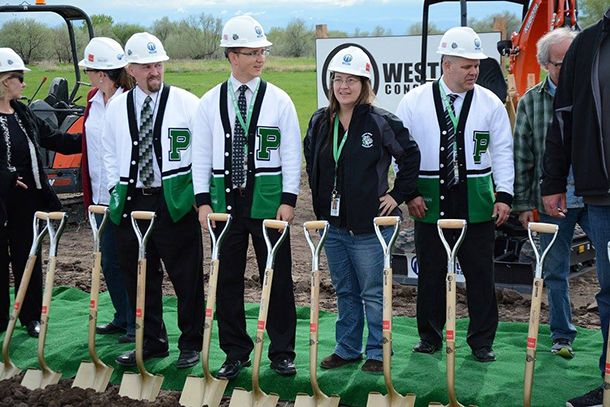 Provo High School teachers take their turn at the groundbreaking for the new Provo High location in April 2016. (Photo by Rebecca Lane/UV360)

Following Thanksgiving break, district employees will receive a bonus that is worth 2.5 percent of their salary.

“We wanted to make the gesture that showed we are conscious of them and the hard work that they do,” Jensen said. “Going forward, we are always doing what we can to make teaching a great profession in Provo.”

Provo School District’s financial school year officially ends on Sept. 1, but the district has already figured out the budget for the rest of the month.

“The savings we see in our budget amount to make it so we can make this payment to all of our employees,” Jensen said.

“We wanted to make the gesture that showed we are conscious of them and the hard work that they do.” — McKay Jensen, Provo School District president

Across the nation, schools are struggling with teacher shortages. Then, like in any profession, school districts across Utah compete to get the best teachers. And Jensen says Provo School District wants to retain its teachers.

“We want to create a position where we are getting the very best of those teachers and have them stay a little longer,” Jensen said.

Part of Provo School District’s retention problem comes from having a variety of young teachers recently graduated from BYU and UVU. While Jensen says these teachers are great, the school district often loses those teachers after a few years because their spouses finish school or they switch professions.

Jensen hopes this bonus will show teachers that Provo School District respects its teachers and wants them to stay. Teachers in the district were told about the bonus in a kick-off meeting Thursday morning.

“They are professionals and they should be rewarded like any other worker in the state,” he said.

Duncan Aviation on track for Provo Airport expansion Next post