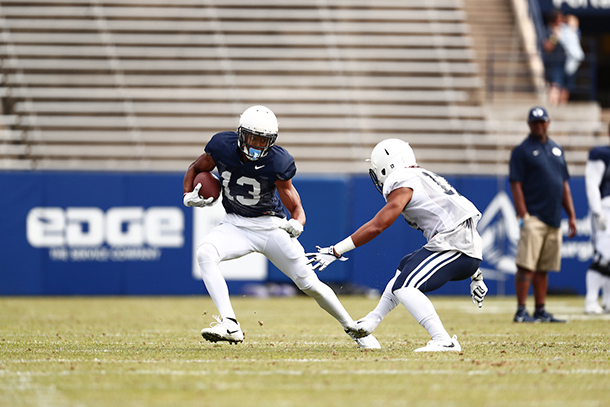 Five years have passed since a BYU receiver last produced a 1,000 yard season. Graduating the top three receivers from the previous season doesn’t seem like an ideal scenario for reversing such a trend this fall.

Still, the Cougars aren’t lacking confidence when it comes to how things could play out in the passing game. Speed and athleticism characterize this mostly raw cadre of receivers. Combined with an experienced quarterback like Tanner Mangum who has a good track record as a passer, it’s not a stretch to think there could be a breakout star or two in the mix.

Three speedy receivers, in particular, could really open things up down field for BYU in 2017: 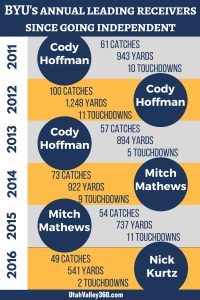 Getting a second chance to make a difference matters to Jonah Trinnaman.

Trinnaman joined BYU last season as a highly touted recruit out of Snow College. During his debut season, Trinnaman showed flashes of game changing potential but lacked consistency. Trinnaman ripped off a 75-yard touchdown on the opening play against Toledo. He only totaled more than 50 yards in one other game, however, and finished the year with 321 yards on 28 receptions.

“Making that (junior college) jump to here, it was just a little bit different,” Trinnaman said. “Not speed wise, but things were different. I wasn’t as comfortable as I was at Snow. I learned that things take time and just to be patient. Just keep chopping wood.”

Now Trinnaman is more comfortable in the offense. He has also taken on a new role as a senior. As BYU’s top returning receiver from last season, Trinnaman has become a mentor to a crew of younger, inexperienced receivers around him.

His brand of leadership is simple. He creates a road map for the other receivers by pushing his limits in practice and on the field.

“I’m not much of a rah-rah dude,” Trinnaman said. “I’m not going to scream and yell and say all these things. That’s not how I lead. I usually try to do it by how I practice. … Yeah, I think it’s my job to help guys out. I don’t want to be selfish. If I’m selfish, then we all don’t do well.”

Watching from the sidelines last season wasn’t Micah Simon’s first choice. Simon was dying to burn his redshirt and do his part to ignite the BYU offense.

The former high school quarterback from Dallas instead learned the value of patience. With a trio of seniors in Kurtz, Pearson and Jurgens ahead of him, Simon soaked in the playbook and prepared himself for when his turn came.

“Having to redshirt, that was hard,” Simon said. “Having meetings with Coach (Kalani) Sitake, Coach (Ty) Detmer and Coach (Ben) Cahoon, I just trusted what they had for me and what their plan was. I accepted it right away and took it serious on the scout team and took it serious in the weight room and just got a whole lot better. A year to just focus on yourself besides game preparation goes a long way.”

If there’s a player who can be a game changer at receiver, Simon fits the bill. His 6-foot-1 frame, combined with excellent speed means that the sophomore can get off the line, get open and zero in on an approaching ball as good as anyone. Simon has also added muscle to his speed and athleticism.

The end result? A player who seems poised to stretch the field and burn opposing defensive backs for long gains and big touchdowns. Simon feels like he has the tools to be a reliable option for Mangum.

“My speed and my ability to make plays after the catch fits well in the offense,” Simon said. “We’re not just a home run hitter team where we’re just going to take shots down the field the whole game. We’ll hit them short, run the ball, play action them and then that’s when we’ll hit our shots. Hitting the short routes early on will help us as an offense.” 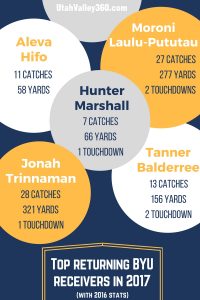 Expectations have soared for Talon Shumway ever since his senior season at Lone Peak. Shumway showed off his potential as a receiver when he tallied 1,049 yards and 16 touchdowns on 72 receptions for the Knights back in 2012.

Now he finally has a chance to do similar things for BYU. After a redshirt season and another year of mop-up duty, Shumway is now poised to break out as a receiver. The sophomore feels comfortable in the offense and is now ready to prove he can bring the full playbook to life.

That’s one common thread he shares with his teammates.

“Collectively and individually, everybody has something to prove — which I think is a good thing,” Shumway said. “Most of us have been here for a couple of years. We’ve got the system down pretty well and I think there’s a lot of desire for all of us to go out and prove that we belong.”

Shumway is in the mold of taller receivers that have been a fixture at BYU in recent seasons. His 6-foot-3 frame means he’ll be able to create plenty of mismatches with his size. Shumway is already making noise ahead of the season and earned praise from head coach Kalani Sitake for his performance in BYU’s first scrimmage of fall camp.

For his part, Shumway isn’t simply content on relying his size. He wants to create advantages to exploit no matter who lines up against him.

“I just want to put in the work to be able to perform in any situation instead of just having to pick and choose when I can use an advantage,” Shumway said. “What it really is going to come down to is the time I put into skill work and fitting into the system and executing right.”

Utah-Tube: GENTRI encourages being 'The One' in new video shot in India Previous post