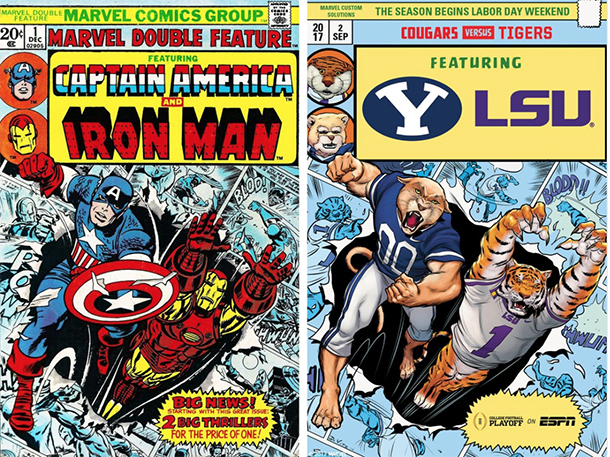 ESPN and Marvel teamed up to recreate classic comic book covers for college football kickoff season. The BYU-LSU game is a recreation of the “Marvel Double Feature, Vol. 1 #1” from December 1973. (Image courtesy of ESPN/Marvel)

ESPN and Marvel teamed up to recreate six classic comic book covers for college football kickoff season — and BYU made the list.

In a recreation of the “Marvel Double Feature, Vol. 1 #1” from December 1973, Cosmo the Cougar blasts through the comic book cover alongside LSU’s mascot Mike the Tiger. The original cover — which has Captain America and Iron Man — was created by Jack Kirby. The homage artist for the BYU-LSU cover is Andrea Di Vito.

In the preseason poll, LSU is ranked No. 13 in the Associated Press Top 25. While BYU isn’t ranked in the AP Top 25, SB Nation’s Alex Kirshner predicts BYU will beat LSU.

Before playing the Tigers, the Cougars are hosting a preseason game at LaVell Edwards Stadium against Portland State on Saturday, Aug. 26 at 1 p.m. MDT.