Home Things To Do Events Roughing it at Education Week

Roughing it at Education Week 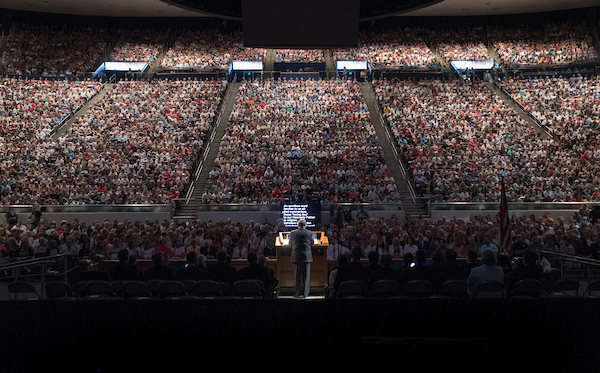 For one week a year, even before football season has begun, a large parking lot on BYU’s campus is overrun with visitors that descend on Provo in RVs, motor homes, campers and trailers. They come from all over the country.

During that week, that parking lot located adjacent to the Student Athlete Building and the Indoor Practice Facility turns into a makeshift KOA campsite.

They arrive to attend BYU’s Education Week and it’s a pilgrimage that happens every August.

Education Week, which started in 1922, is one of the largest continuing education programs of its kind in the world. It features more than 1,000 classes and more than 200 presenters. Classes are offered on a wide variety of topics, including genealogy; law; human relations; arts; science; health and fitness; self-improvement; communication; marriage and family; missionary work; and psychology, to name just a few.

Even BYU Athletic Director Tom Holmoe has his own class, where he addresses the state of Cougar athletics. There’s something for just about everyone.

Among the thousands of people who attend Education Week are those who enjoy roughing it for a week in a parking lot. That includes battling the searing August heat as well as fighting off mosquitos.

In addition to recreational vehicles, some people pitch tents on the blacktop. It’s an Education Week takeover.

After a full day of running to classes, attendees that stay in the parking lot like to set up lawn chairs in the evening. They eat, relax and share notes from what they learned that day.

It’s more economical than paying for hotel rooms and it’s a way to reconnect with family members in an outdoorsy way. Maybe it’s a way for people to return to their pioneer roots.

For many families, Education Week is a hallowed tradition that has produced life-changing experiences.

“We’ve had remarkable things happen in our family because of Education Week,” Doug Hunt from Arizona once told me as he grilled hamburgers. “We’ve had a wayward child turn around in one week here. One of my sons met his wife in an Education Week class.”

Other stories on Education Week

4 tips for getting a seat at Education Week