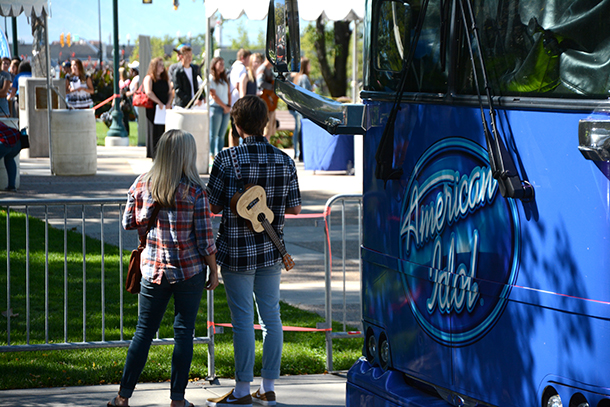 Those are the words singers auditioning for “American Idol” heard as they reached the end of the long audition line. “American Idol” rolled into Provo, Utah on Wednesday to hold first round auditions for the show that was revived for ABC after being canceled on Fox earlier this year.

Of the hundreds of singers who came to audition, many of them were local artists. Michele Willis, 23, drove down from Salt Lake City for her first ever reality TV audition.

“I was kind of forced into it,” Willis said. “My fan over here signed me up a few days ago and just let me know a couple days ago that I was auditioning today.”

Though nervous, Willis said she was grateful to be surrounded by supportive friends.

“She really gets me into this stuff, but I love it,” Willis said. “If she didn’t do it, then I wouldn’t be here.”

Michael Wood, 19, drove from a night shift in Ogden, Utah. The Payson, Utah native has had people encouraging him to audition for years.

“I’m hoping to make it big,” Wood said. “I’ve been doing this my whole life.”

Auditions began around 8 a.m. Wednesday morning and will go until around 6 p.m. However, the show will listen to everyone who wants to audition as long as they are in line before 5 p.m.

“American Idol” is stopping in 23 cities across the United States in the first round of auditions in search of “the next American Idol.” The 16th season of the show will air in 2018.

Niche ranks BYU in 33 categories for best colleges, UVU in six Next post