Vote by mail: Easier for voters, more work to count 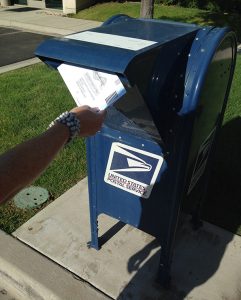 Utah County is expecting about a 40 percent participation rate with the mail-in election in November. (Photo by UV360)

If it seemed like it took longer than usual to get election results after the Aug. 15 primary this year, well — it did. A mail-in election means higher voter turnout and more convenience for voters. But it also makes more work for the people counting ballots, which means a longer wait for results.

“Just by the nature of the type of voting, there definitely is more involved in processing a by-mail ballot,” said Utah County clerk/auditor Bryan Thompson.

That’s because when people go to the polls to vote, there’s a trained worker there who checks their ID. Then the voter casts a ballot on an electronic machine. After that, all the county needs to do at the end of the night is get the data and upload it for results. The county verifies all provisional ballots, but that’s usually only 2-3 percent of the total, he said.

In a mail-in election, once the county gets ballots back it must verify signatures on every ballot, then scan each one to tabulate. “There are quite a few more steps,” Thompson said.

And with the mail-in election there were more ballots to verify and count. Turnout countywide was around 27 percent — and more than 30 percent in some cities — when it’s usually around 15 percent in a municipal primary election. Provo’s turnout was 31.28 percent — “I have to tell you that is higher than I even anticipated,” said Provo city recorder Janene Weiss.

Then there’s the issue with ballots arriving after election day. This year, the county had counted 30,000 ballots by election night, Thompson said. But it received another 25,000 ballots in the mail that day.

“It does take an extra two or three days,” Thompson said. … “I learned real quickly how impatient people are for results.”

Because voters only needed their ballots postmarked by the day before the election, they continued to arrive for a while after Aug. 15. In Provo, the county counted six additional votes between Aug. 25 and Aug. 29, Weiss said.

“It made it so we were extra cautious. Better to be cautious than, in haste, inaccurate.” — Bryan Thompson, Utah County clerk/auditor

“I think everything went fairly smoothly,” other than the pre-election issue of unaffiliated voters getting ballots with the Republican congressional primary, Thompson said. And even with that problem, workers were able to easily separate them once they received the ballots back. “It made it so we were extra cautious. Better to be cautious than, in haste, inaccurate.”

Now that the counting is over (unless there’s a recount), Thompson said he’ll meet with his staff and city recorders. They’ll review how they did, and decide whether there are any areas to improve for November. And then next week they’ll be turning in the ballot proofs for the November election, which they need to mail by Oct. 17.

Thompson said he’s estimating that voter turnout in November will be around 40 percent, but he’s preparing for 50 percent. And once they’re done counting in November, they’ll regroup and decide whether to continue with vote-by-mail elections.

BYU vs LSU: How do the Cougars match up against the Tigers? Next post