Home Sports BYU BYU vs LSU: How do the Cougars match up against the Tigers?

BYU vs LSU: How do the Cougars match up against the Tigers? 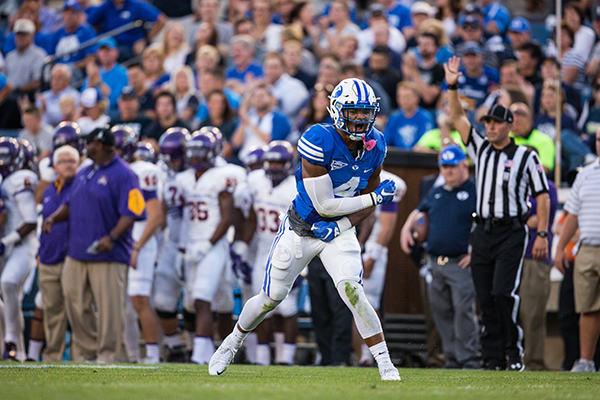 Facing tough opponents in September is nothing new to the Cougars. Still, an upcoming gauntlet of Power Five teams over the next three weeks is guaranteed to test BYU’s mettle in every conceivable way. It all starts with LSU.

“LSU has a lot of tradition and they’re a good program,” BYU coach Kalani Sitake said. “Everything you can think of, they’re up there with all the great schools.”

BYU is playing the No. 13 Tigers for the first time. The Cougars are 3–7 versus their last 10 ranked opponents. Their most recent victory came via a 35–24 comeback win over Boise State two years ago.

Devastating flooding caused by Hurricane Harvey necessitated moving the game from Houston to New Orleans. Now the two teams will battle in the Superdome closer to the Tigers’ home turf. Kickoff is still scheduled for 7:30 p.m. MT on Saturday and will be broadcast on ESPN.

One thing BYU can count on is seeing a LSU team that’s formidable on both sides of the ball. Here’s a closer look how the Cougars stack up against the Tigers.

LSU built a reputation for smash-mouth football under former head coach Les Miles. The Tigers used a strong running game and tough defense to grind down opponents. Things will change up quite a bit under new offensive coordinator Matt Canada.

Canada prefers a more wide-open attack. He thrives on using misdirection and shifts to confuse opponents and open things up down field. While coaching at Pittsburgh last season, Canada helped the Panthers’ offense average 40.9 points per game.

“We’re going to see a lot of weird things up on the front line,” defensive end Corbin Kaufusi said. “Guys lined up where we think they wouldn’t line up. We’ve got to be ready for that.”

“You can’t make any errors. “You make an error, he’s going to gut you. He’s going to take the ball and run it for 40 or 50 yards. Everyone really has to be knit tight.” — Sione Takitaki, defensive end

An X-factor for LSU will be Derrius Guice. An early Heisman Trophy candidate, Guice stepped in while Leonard Fournette battled an ankle injury a season ago. He rushed for 1,387 yards and 15 touchdowns in 2016.

BYU ranked ninth in rushing defense among FBS teams last season, allowing 112.8 yards per game. Still, the Cougars will have their work cut out for them in slowing down Guice.

“You can’t make any errors,” said defensive end Sione Takitaki. “You make an error, he’s going to gut you. He’s going to take the ball and run it for 40 or 50 yards. Everyone really has to be knit tight.”

LSU may offer more vulnerability in the passing game. Senior quarterback Danny Etling threw for 2,123 yards and 11 touchdowns a season ago, but he also underwent back surgery in the spring. Etling lost his top two receivers from last year as well and the offensive line protecting him is seriously lacking depth.

If BYU can contain Guice for significant stretches, Takitaki is the type of pass rusher who could make life miserable for Etling. He registered a pair of sacks against Portland State and totaled three tackles for loss.

LSU is the fourth SEC opponent BYU has faced since becoming an FBS independent in 2011. The Tigers are one of two SEC teams on the schedule this season. The Cougars also face Mississippi State in October. Click on image to enlarge. (Infograph by UV360)

One major key for the Cougars is limiting chunk plays. BYU did well in this category against Portland State, yielding three total chunk plays to the Vikings.

Two things immediately stick out about LSU on defense. The Tigers are lightning quick throughout the secondary and physical in equal measure along the line of scrimmage.

LSU finished in the Top 10 nationally in both scoring defense (15.8 points per game) and total defense (314.4 yards per game) last season. Only one opponent scored more than 21 points against the Tigers in 12 games. Running the ball or throwing it on LSU is equally tough. The Cougars will have their work cut out in moving the chains.

“They have really athletic defensive backs,” tight end Matt Bushman said. “They are tough and know how to play the game — we just have to prepare. As receivers and tight ends, we’ll have to get off the press and use our hands to get them off of us — get some separation. We are just working to get the best techniques. We have to be really physical this game and step it up from last week. It’ll be a fight.”

Hitting tight ends, slot receivers or running backs on short routes across the middle could be BYU’s most effective attack plan. Squally Canada and Kavika Fonua combined for 157 yards on 23 carries against Portland State. Running lanes are less likely to be open for the duo against LSU, however, given the strength of the Tigers up front.

The Tigers are more vulnerable behind the line. LSU linebacker Arden Key, a projected Top-10 2018 NFL Draft pick, is sidelined with a shoulder injury. Key led the Tigers with 12 sacks a year ago. LSU already had to replace two other linebackers, Duke Riley and Kendall Beckwith, who combined for 184 tackles in 2016.

Tanner Mangum proved most effective in attacking shorter routes against Portland State. Similar routes could be open against LSU. Ten different BYU receivers caught a pass against the Vikings. Mangum’s top receiver ended up being Bushman, who totaled 56 yards on three catches.