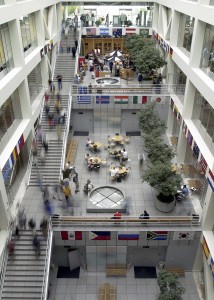 If you like quick Wi-Fi and getting caught on a date, then Provo is the best college destination for you.

HighSpeedInternet.com named Provo, home of Brigham Young University and Provo College, the third best city for college students in America in a study this week.

Among Provo’s strongpoints for college students included the variety of date night venues, hiking locations, intramural sports leagues, and, of course, high speed internet due to Google Fiber and Utopia.

HighSpeedInternet.com combines data from studies of American cities and grades the cities side by side. Users can sort the cities by how they prioritize specific living factors. When grading Provo, they gave the city an A for low traffic, an A- for air quality and a B- for safety. Provo earned a score of 46 for walkability.

Provo schools have competed well in other studies for college students this summer. In June, the National Council for Home Safety and Security named BYU the 25th safest college campus in the United States. As no surprise in July, BYU won the coveted position as No. 1 most “Stone-Cold Sober” campus for the 20th year in a row. Earlier this month BYU ranked well in 33 categories in a study performed by Niche. Among those categories, Provo placed as No. 4 for Best Colleges in Education in America and No. 4 for Most Conservative Colleges in America.