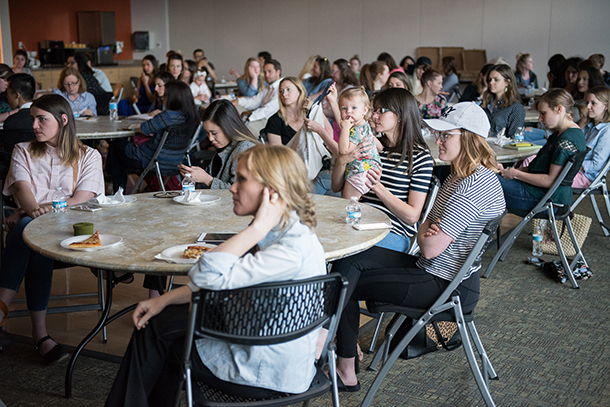 Women attend the Braid Workshop, a once-a-month meeting in Provo to teach women skills to help them build a business. (Photo by Trevor Christensen)

Startup Building, Braid workshops, Girls Summit, Women Who Build, and collaboration with BYU, UVU and others — these are all part of Provo City’s efforts to be part of wealth creation in the community.

Workforce development and job creation are important pieces of the economic development pie. So it’s important for the city to play an active part in that wealth creation, Provo deputy mayor Dixon Holmes told the city council this week.

So the city is involved in helping women and other entrepreneurs with office space, networking and more.

Several years ago, Provo helped with a $200,000 loan to renovate the Startup Building. It now houses office space for small businesses, an events center and DevMountain, a coding and design school that was recently acquired for $20 million.

The space is Provo’s version of Chicago’s Campus 1871, Holmes said. “This is one way that we’re helping entrepreneurs who could be the next big unicorn … trying to service as many of them as possible.”

In addition to the businesses in the building, it has space available for weddings and other events. “This is what pays the bills for the other space.”

Another successful business that came out of the Startup Building was Scan — a company created by Garrett Gee, who is currently traveling the world with his family as the Bucket List Family. Snapchat bought Scan in 2014 for $54 million.

Braid is a workshop series for women entrepreneurs — and anyone else — interested in networking and learning how to grow their ideas and businesses. Allison Lew, business development coordinator for the city, along with six volunteers, organize and run the monthly events.

Many of the 800 people in the Braid community are in the idea phase of a business. So the workshops give them an introduction to skills and the opportunity to connect with people in the community who can help them.

“We help mobilize them to make more money,” Lew said. … “Entrepreneurship is one area, that if you’re the primary caregiver for your children, you have flexible hours, and can scale your business up and down as needed.”

Provo held its first Girls Summit this year as part of International Women’s Day. Four hundred girls met with professional women in a variety of careers, including engineering, science and videography. Now they’re working on the 2018 summit. “We are especially interested in getting our girls in actual workplaces,” said Tanei Henry, a Braid board member and Girls Summit organizer.

Last year’s Women Who Build focused on charitable good, personal development and business. This year, the focus will be on building a business, Lew said. BYU professors will teach a series of business workshops, and women on teams will collaborate and build a business. Then they’ll pitch their ideas to a group of local entrepreneurs.

“We’re hoping with this year’s program, women will walk away with business-building skills and meaningful relationships,” she said.

Provo works with BYU’s Rollins Center for Entrepreneurship and Technology, UVU, 1 Million Cups and others to encourage and build entrepreneurs in the city. The city facilitates spaces and events where entrepreneurs can network and collaborate, Lew said.

“We are always looking for new ways to serve this segment of the business community,” she said.