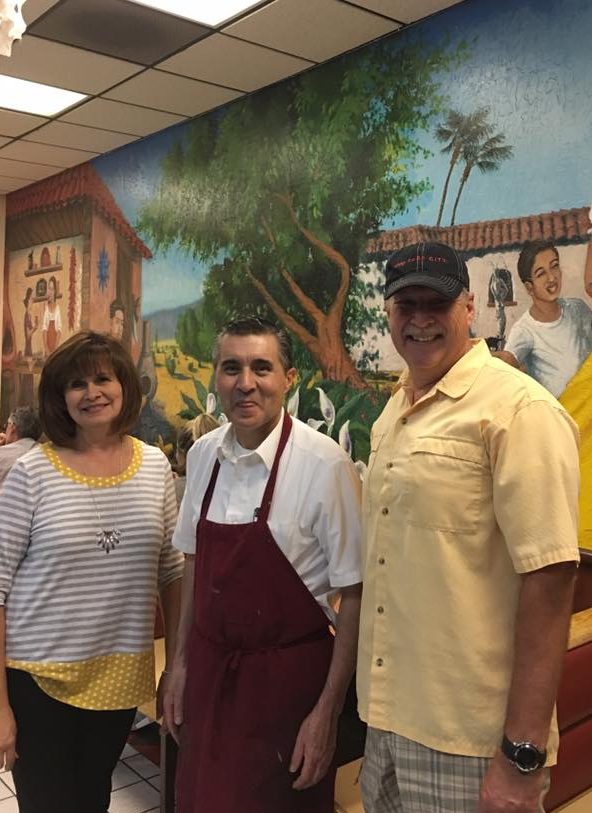 The Gebhardt’s have been frequent customer’s since 1976 when Pam Gebhardt had her first taco. (Photo courtesy of El Azteca’s Facebook)

El Azteca has been a staple to get good Mexican food in Utah County, but after 55 years the owners have decided to close their doors.

The owners of El Azteca, the Rubio and Revuelta family, announced their closing on Facebook on Aug. 22. The restaurant that opened in 1962 has been the go-to Mexican restaurant for those living in Utah County. The business has created a lot of fond memories for families in the area, and those families came on closing day to show how much the restaurant would be missed.

“Due to an unforeseen building remodel, as well as a change in direction by our leasing company, we will be closing our doors in Orem on Aug. 31, 2017. Our family is currently considering our next step,” the families said on Facebook.

The final days of El Azteca were spent celebrating and honoring creators José and Felicitas Rubio. The celebration included serving all the local favorites, reflecting on special occasions with the restaurant like birthdays and wedding celebrations, having familia night on Monday, enjoying Taco Tuesday and staying open late on their last night in business.

El Azteca started when José Rubio and his sun came from Tijuana, Mexico in 1962 to help at a new Mexican restaurant. With the location being at the bottom of the BYU campus, José knew he wanted to stick around to achieve his dream of providing his kids with a college education. His family later joined him in Utah County, and the rest was history. 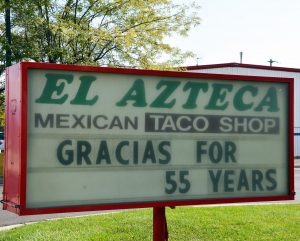 The popular restaurant had devoted customers. Some even eating there since 1967.

Cast Vasquez from Payson, Utah, remembered her parents taking her to the old El Azteca restaurant as a kid. She remembers José Rubio and the great family atmosphere that the restaurant had to offer.

“José was great to everyone who came in and treated everyone like family,” Vasquez said. “We always looked forward to eating there. It was like going to grandma and grandpa’s house in Mexico for me because I never met my own grandparents. I have truly missed it and the taco shop will be missed as well.”

Michael Handy’s family has eaten at El Azteca on a frequent basis since 1967. As a BYU family living in Provo and later in Orem, going out to eat at El Azteca became a family tradition. They spent many Christmas Eve dinners throughout the ’70s and ’80s at the restaurant. When Michael turned 2 years old, his parents took him there for his birthday where he was seated in a special chair and treated like a king. Each time they went to the original Provo location south of campus, their family would request their favorite waiter, Daniel, who called them all by name as he consistently provided personalized and attentive service.

“Our favorite foods included the smooth as silk refried beans, enchiladas, watermelon drink, rice pudding with cinnamon and the custom bean soup,” Handy said. “Speaking of the soup, when my mother was pregnant with my third brother in 1976, she was so morning sick that the only food she could keep down was the El Azteca bean soup.”

One night, Handy’s mother went to the restaurant and told Mrs. Rubio about her morning sickness at the register and asked if she could purchase some soup to go. Mrs. Rubio told her to go home and return with the largest bowl she had. Mrs. Rubio filled a huge salad bowl to the brim with their delicious bean soup and only charged Handy’s mother $1. His mother returned to El Azteca several times a week throughout her pregnancy and was always greeted with a smile by the cheerful Mrs. Rubio.

“Our favorite foods included the smooth as silk refried beans, enchiladas, watermelon drink, rice pudding with cinnamon and the custom bean soup. Speaking of the soup, when my mother was pregnant with my third brother in 1976, she was so morning sick that the only food she could keep down was the El Azteca bean soup.” — Michael Handy, El Azteca customer

Handy’s mother and father were the last customers El Azteca will ever have. The family couldn’t think of anything better than to end the night at a place that has been such a staple in their family since 1967. Handy said after the original Provo location closed, his family continued to frequent the two taco shops in Provo and the one in Orem. El Azteca has been a part of their lives for 50 years and they will miss the amazing food and celebration of Mexican culture.

Pam Gebhardt and her husband live in Orem and went to El Azteca on a regular basis. The two have loved living so close to the restaurant and are sad to see it go. The restaurant was a big part of their life and loved that those working at El Azteca would recognize them when they went to eat. El Azteca was the first place Gebhardt tried a taco.

“I had never eaten a taco before 1976 and was mortified that I had to pick it up with my hands and not make a mess. It is rather funny now because I can still remember the occasion and how uncomfortable I was learning how to do this. It didn’t take long to learn to love Mexican food,” Gebhardt said.

Matthew DeFresne moved to Provo  in early ’70s with his mother who worked for KBYU.  He said his mother loved Mexican food and would go to El Azteca on a regular basis for the great food, wonderful cross-cultural experience and warm interactions with the El Azteca staff. He loved the feeling he got when he went to the restaurant and wishes the best for El Azteca family.
“The authentic food, the wonderful family atmosphere, the generous portions, and the feeling of love and acceptance,” DeFresne said. “The closing of El Azteca is a real loss in many ways as they have been an important part of the the fabric of the community. I wish El Azteca family the best in their next steps in life.”
Share