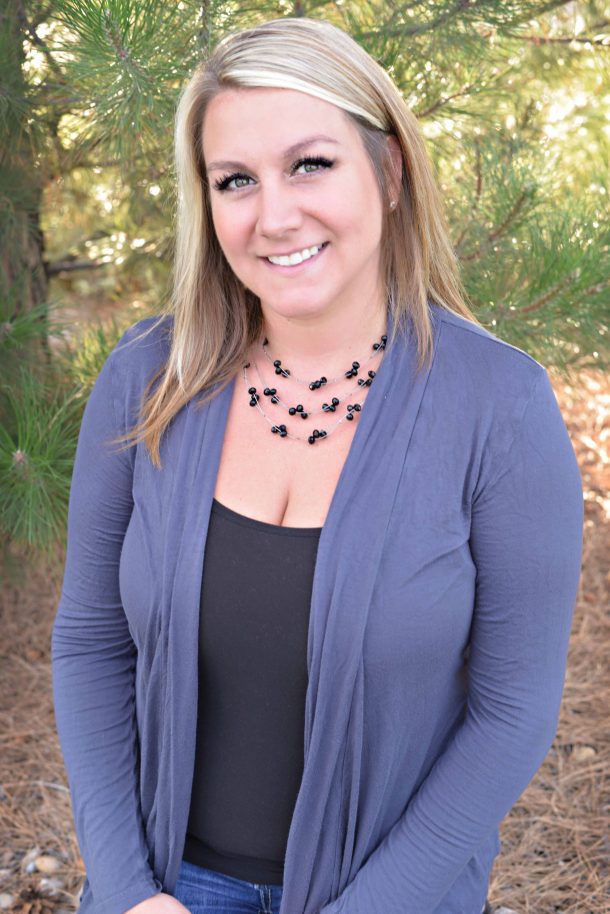 Lianne Pengra works at Camp Williams National Guard Base, and one of her favorite projects was creating the base’s first coffee shop, Connex Cafe, out of a military shipping container. (Photo by Jamie Frost)

As told to Kate Nash

I grew up in a small farming community in Washington state, and then my family relocated to Bountiful. After graduating from Woods Cross High School, I went to Westminster College for a year on a scholarship. I worked as a server in a restaurant, and my co-worker set me up with her brother. I hung out with Christopher for a month, and then we went our separate ways.

Year later, I went to his sister’s wedding and we saw each other again. His family says the second I walked into the reception, he stopped talking mid-sentence and stared at me. We both felt a spark.

He was getting ready for a military tour in Japan as a hydraulics mechanic. We spent every day together the week before he left. We kept in touch over AOL messenger. A few months later, I flew to Japan and we got engaged. We came to Utah to get married, and then back to Japan.

Even though I had never lived more than 10 minutes from my parents, I fell in love with the culture of Japan. I didn’t speak the same language as my neighbors but everyone was welcoming.

A few years later, we were transferred to Las Vegas. I hated it! I did find a non-denominational Christian church that I plugged into, and it helped me get by while we were there.

Then we moved to Eagle Mountain. When my husband told me he wanted run for mayor, I thought he was joking. But we prayed about it and felt strongly it was what God wanted. Chris served for just under four years. He recently stepped down to take a position as the economic development director for Rocky Mountain Power. Being married to the mayor helped me develop thick skin. There are “keyboard warriors” who say unkind things online, but my husband showed me how to deal with it gracefully.

I work for the Utah National Guard in the “Morale, Welfare & Recreation” program — which is a fancy way of saying I run the facilities that service members use at Camp Williams. This includes a swimming pool, a service member’s club, a barber shop, a reception center and a coffee shop. One day I am helping a bride with her wedding, and the next I am putting together a funeral service for a veteran.

When I am not working, I am with my two daughters, Gabriella (10) and Gracelyn (7). They couldn’t be more different, but they are so fun and entertaining.

We also started our own church — Redemption Hill — in Eagle Mountain. We had been meeting with Risen Life in Salt Lake, but we wanted somewhere closer to home. When I first moved to Utah, I thought I would be ostracized because I am not LDS. It was the exact opposite and I have never felt that it is a negative. I think some of that has to do with the attitude I project. I don’t spend any time on the comments section of the Salt Lake Tribune, if you know what I mean.

One of the most fulfilling things I have ever done is donate a kidney. I met Aidan’s mother when I was working at the Eagle Mountain city office. I heard they were searching for donors and felt a strong message, almost audible, from God that it was going to be me. I filled out a questionnaire and learned we were a match.

Everything went perfectly. The surgeon told me my kidney could not have been a more perfect shape and size for little Aidan. On June 30, 2017, we celebrated our one-year “kidney-versary.” My family and Aidan’s family met up a park and it was so amazing to see him running around and feeling good. Life continues to be fulfilling.

An easy choice: Talon Shumway goes from ‘Lone Peak 5’ to ‘Go-To-Guy No. 1’ Next post