Carl and Carol Butler remain active in the 80s in Payson 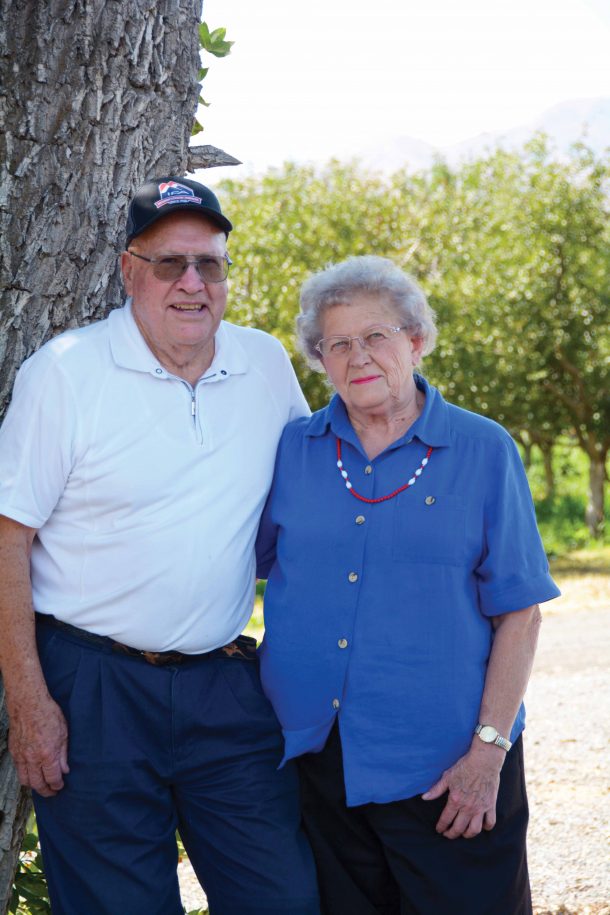 Carl and Carol Butler built their home themselves in Payson in 1971. “I love where we are because we’re central in the valley. I can see everything whichever way I look,” Carol says. “We have these beautiful mountains around us. Every night when I pray, I thank Heavenly Father for what I see, for the harvest and for the people.” (Photo by Dave Blackhurst/UV Mag)

I was born in Santaquin in 1935 in an old two-room sandstone house straight across the street from the cemetery. When I die, I’ll be 50 feet from where I started.

I’ve always said the first date with Carol was a knockout because I can’t remember it. We don’t know where we went. We’d often go to high school dances and we would dance the whole dance from start to finish. We would never miss a dance.

I’m the plant manager at McMullin Orchards — but really, it manages me. We have so many cherries that we run a day shift and a night shift, and I run the night shift. I get there around 4:30 p.m. and I get home at 3 a.m.

Prior to that I was finishing two construction jobs at BYU, one at the Richards Building and one at Wasatch Mental Health by Seven Peaks. Nearly two decades ago, I was getting tired of construction and turning 65. My ward clerk was one of the guys I work for now at McMullin Orchards.

I drove into his driveway one morning at 6:30 a.m. and said, “David, have you got anything you’d want me to do on the farm? I’m so tired of construction.” He said, “We were just talking about adding a plant manager yesterday.”

I’ve learned you can’t take life too seriously. You have to have fun along the way.

“I’ve learned you can’t take life too seriously. You have to have fun along the way.” — Carl Butler, Plant manager at McMullin Orchards

I was born in northern Utah but I have lived in the Payson area since I was 7.

I met Carl in high school. He gave me a ring on my graduation evening. A year after graduation we married.

I always wanted to go to college, but when we had the money I got cold feet. I thought I wasn’t smart enough and when I really wanted to go, the funds weren’t available.

My son came home and said, “So-and-so was my substitute teacher today.” I thought, “How did she get in there?” I asked some questions and signed up in the district offices in 1989 to substitute teach.

Every year Spanish Fork High School has me proctor the AP exams, which I’ve done for 10 years or more. I normally substitute once a week, other times it’s three or four times a week and sometimes it’s all day every day.

I love teaching English. It was just something I was born with. My parents always spoke correct English. My dad didn’t complete high school and he was worried he would sound like an old farmer, so he spoke very good English. You never heard “He don’t” or “They wasn’t” or anything like that in my house.

We have been so blessed with good health. Yes, he has hearing aids and yes, I wear glasses but we can do whatever we want.

We can move and we are not confined to anything.