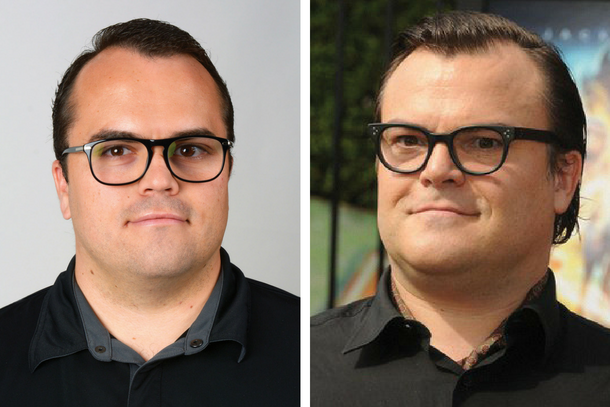 Ryan Lunt, who grew up in Orem, was first told he resembles Jack Black at age 15. He was working at Sun River Gardens when two employees mentioned he reminded them of “Nacho Libre” after seeing the recently released movie.

Another lookalike moment occurred when Ryan was at a gas station in Winnemucca, Nevada. Someone in the store followed him all the way out to the parking lot, certain he was the real deal.

When the movie “Goosebumps” came out, in which Jack plays a prominent role, all the neighborhood kids started paying special attention to Ryan.

In addition to sharing looks, Ryan and his famous double are both musically inclined. While Jack shares his voice in films like “School of Rock” and with his rock band, Tenacious D, Ryan uses his pipes to embarrass his mom by singing a little too loudly at church. And if you are lucky, you might even catch Ryan belting karaoke at Callie’s Cafe in Orem.

One stark difference? Jack is 21 years older and three inches shorter than Ryan.

Ryan is a project manager for Tybera Development Group in Orem and recently moved to Herriman with his wife, Jamie. The couple is expecting their first baby this spring.

Who is Jack Black?

Jack Black is an actor, comedian, writer, producer and vocalist. His most popular movies include “Shallow Hal,” “School of Rock,” “King Kong,” “Nacho Libre” and “Tropic Thunder.” While most of his movies are comedic in nature, his detour into drama with the movie “Bernie” earned a Golden Globe nomination. He has also done voice work for the Kung Fu Panda movies and released three albums with his comedic rock group, Tenacious D.