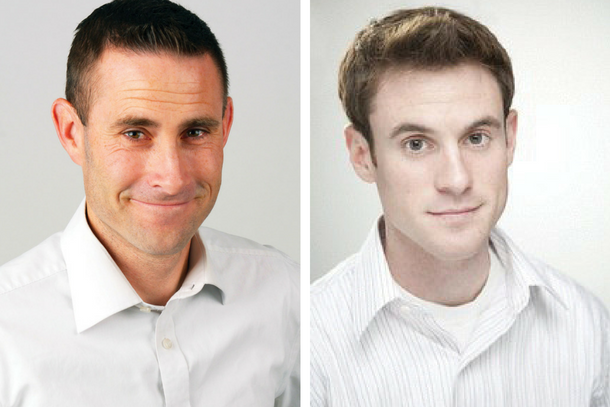 As the father of four young children, Josh Rohatinsky knows all about BYUtv’s popular sketch comedy show Studio C. But it’s not just his own kids who think he looks like cast member Matt Meese.

“I get a lot of parents coming up and telling me their kids wanted them to ask if I am Matt Meese,” Josh says.

Josh, who grew up in Provo, has had several people ask to take photos with him at BYU football games and even on an airplane. Luckily, Josh is a fan of Matt and thinks he has some of Studio C’s best characters such as soccer goalie Scott Sterling. Unlike Scott Sterling, Josh’s athletic endeavors don’t involve getting hit in the face repeatedly. Josh was on the track team at BYU and has competed professionally in distance running. These days he stays active with Spartan races.

In addition to being told he looks like Matt, Josh has also been compared to Adam Levine at times, mostly when he has a little facial hair.

Josh lives in Spanish Fork with his wife, Jena, and their four children. He works for Intermountain Healthcare as a the project manager for the Utah Valley Hospital Replacement Project.

Who is Matt Meese?

Matt Meese is a sketch comedian and actor best known for his role on BYUtv’s popular show Studio C. The New Jersey native came to Utah to attend BYU. Matt is not only one of the original creators of Studio C, but he also serves as the show’s head writer. More than 1.5 million viewers subscribe to their YouTube channel.