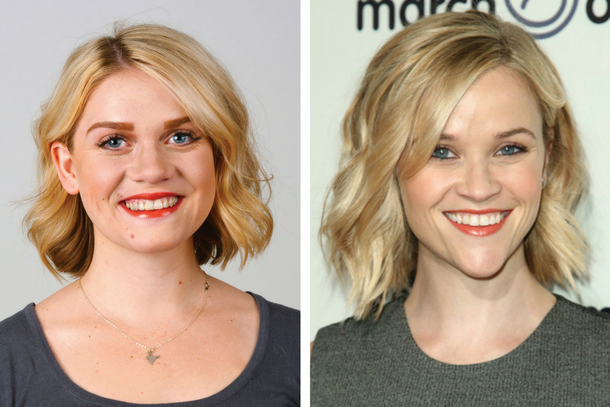 People have been telling Springville resident McKenna Hixson she looks like Reese Witherspoon for years.

“It’s funny because I think I am actually closer to Reese’s daughter in age than Reese,” McKenna says. “But I definitely take it as a compliment.”

McKenna shares a love of performing like her Hollywood twin. She has been singing and acting in musicals since she was a kid.

“I was super shy, and my mom just threw me into it to help me break out of my shell,” she says. “It worked.”

McKenna has appeared in many local productions at the SCERA theater. One of her first shows was “Annie,” and she has also had roles in “Saturday’s Warrior,” “Joseph and the Amazing Technicolor Dreamcoat” and “Footloose.”

The Springville High School graduate is attending BYU studying musical theater and works as a youth mentor at the SCERA. She is also a gifted vocalist and has done recording work locally.

Who is Reese Witherspoon?

Reese Witherspoon is an actress known for her expressive acting style and southern accent. Her breakout role was Elle Woods in “Legally Blonde.” Some of her other popular films include “Sweet Home Alabama,” “Walk the Line,” and “Wild.” Most recently she produced and starred in the HBO television series “Big Little Lies.”