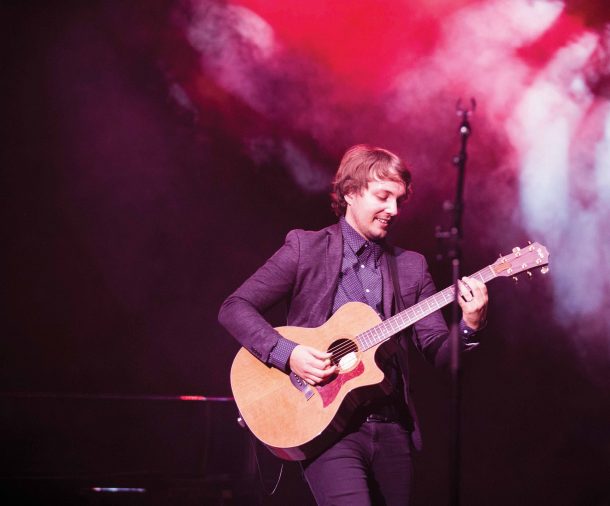 Brady Bills explores Eagle Mountain with his wife, Josephine, and his daughter, Zara. They enjoy the proximity to everything while having quiet evenings. “You can still see the stars here,” he says. (Photo by Ben Sherrill)

I started playing violin when I was a kid. It was awkward to hold under my chin, so when I was 4 or 5 I practiced with the violin in my lap. After seeing that, my mom decided I should try guitar lessons instead.

My first real paying gig was when I was 8 at the Provo Country Club. I was playing Christmas tunes, and a man dropped $50 in my case. He planted the bug that people could pay me to play.

There’s a small community of musicians in Utah, so everyone pretty much knows everyone. David Archuleta’s music director at the time, Kendra Lowe, called me and asked if I’d be interested in a one-off gig where I would get off the airplane and play one show to see how it goes.

After that, they kept me in the band.

Now I’m the guitarist and music director for David. A music director makes sure the band is tight and translates from the vocalist to the band. Sometimes the singer will say something like, “I want this to sound like an organic heartbeat.” So as a music director you have to translate that to play the bass drum softer on beats two and four or less synthesized.

Working with David is awesome. He’s not faking it. He is that nice, honest and real. He’s a great boss to work with and a great singer. Holy cow — his pitch is insane. I don’t think I’ve played with a singer who is that in-tune all the time. He’s very connected with the music in a physical sense. If he’s dancing you know it’s working out. If he’s not dancing something has got to change.

“I want to sound like a piano on the guitar because the piano is warm, full and in-tune.” — Brady Bills, Guitarist for David Archuleta

My 2-year-old daughter, Zara, is always the loud one in the audience. My wife, Josephine, and I are expecting our second daughter this November.

I’m also the guitarist for The Strike. We have a following in Utah, Idaho and California so we play a lot and keep getting hired by fans to play at weddings. Usually if you play a wedding gig, you’re playing covers like Michael Jackson. When we play at our fans’ weddings, we play own original music, and everyone is dancing and singing along.

I majored in classical guitar at BYU. I want to sound like a piano on the guitar because the piano is warm, full and in-tune. It’s not thin and brittle, which guitars can sometimes sound like.

When I was teaching high school, I noticed the kids were so engaged when they learned in a digital format, so I recorded myself and made an online course they can take on their iPads.

I’m returning to BYU to be part of the guitar faculty. Teaching is so cool because it’s not just the music that’s important, it’s also helping students accomplish something hard.