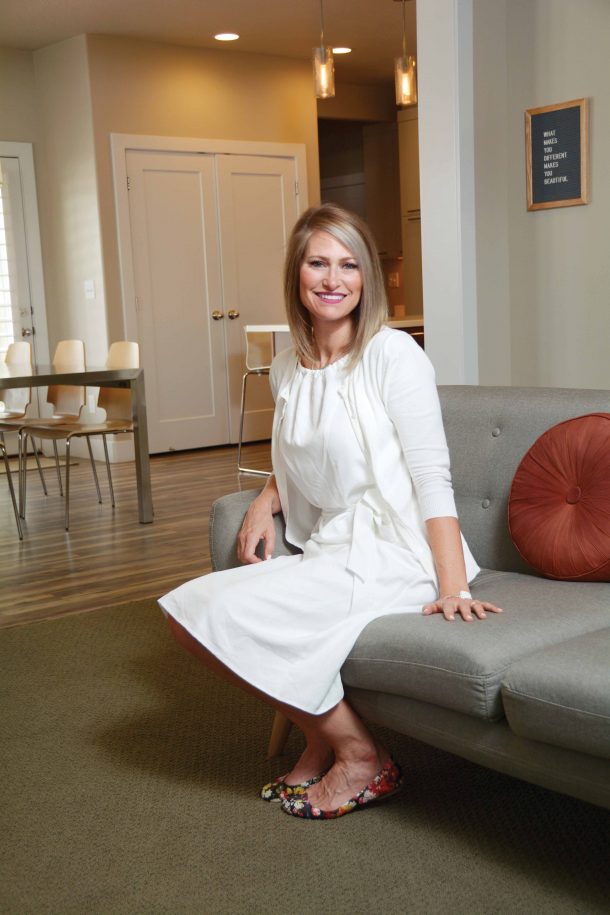 Lehi’s Ganel-Lyn Condie has written five books in two years and has more projects at her fingertips. Her first title — “I Can Do Hard Things with God” — launched her full speaking schedule, which also includes a focus on preventing and understanding with suicide. (Photo by Dave Blackhurst/UV Mag)

As told to Jeanette Bennett

Two weeks before we closed on this Lehi home, I had a horrible impression that we weren’t financially going to be able to live here. My husband felt strongly that we were supposed to be in this Ivory home.

We were both right.

Two days before Thanksgiving 2013, we closed on the house. The following summer, my husband lost his job. This was the second time we had been unemployed. The first time, we had built an expensive home in Davis County. We went through our savings. We ate through our food storage. We sold everything — our Christmas trees, our sleeping bags. We basically sold it all except the piano I grew up playing.

But with this second job loss in 2014, we didn’t have anything to sell. We hadn’t re-accumulated much. We had moved in with a card table and a futon. We were in a new ward. But every day was a miracle. Three times people stuffed hundreds of dollars in our door. I got a gift card from a college friend from 20 years ago.

My husband took a job making half of what he had previously earned. My first book, “I Can Do Hard Things with God,” came out, and I began doing book tours and speaking. He was working 90 hours a week. We hardly saw each other.

Gratefully, my husband has a great job now and we were able to stay in our home. We have chairs from DI. My home office has an old cop desk that I bought for $50. This is home and we love it.

“I have learned that I don’t need ‘things’ to be happy. I’ve learned to rely on God’s timing.” — Ganel-Lyn Condie, author

Hard times teach us. I have learned that I don’t need “things” to be happy. I’ve learned to rely on God’s timing. My first book had been rejected by multiple publishers. It wasn’t until my 40-year-old sister committed suicide that I finally knew I had to include that experience in the book and resubmit it. Covenant published it, and “I Can Do Hard Things with God” became a best-seller. I’ve also published “I Can Forgive with God,” “The Decision That Changed My Life” and “Mother to Mother.”

In the past two and a half years, I’ve spoken at 250 events. I have a stack of “for the ones,” which are letters from readers who have needed my message. I don’t know how fiction authors do it because they don’t get the same kind of feedback.

Now my oldest son is on an LDS mission in Zimbabwe. My daughter is in eighth grade. I’m working on a book that shares more of my own personal story. All of my experiences to this point have brought me here. I’ve dealt with lupus. Chemo. Hair loss. Divorced parents. The death of my sister. Infertility. Financial loss.

But these things — especially my sister’s suicide — have shaped my mission in life to spread hope and faith, and I love being part of that effort.