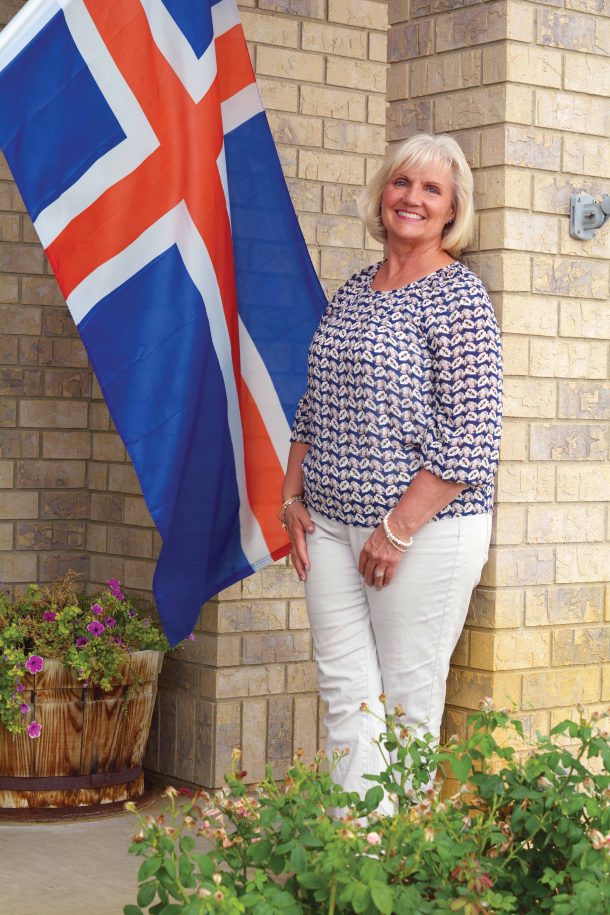 Lil Shepherd grew up in the house next door to hers on the same land where her Icelandic ancestors lived. Spanish Fork treasures its Icelandic heritage and celebrates it yearly with Iceland Days in the summer and Thorrablót each winter. (Photo by Dave Blackhurst/UV Mag)

When I was serving my LDS mission in Iceland, I got an email from FamilySearch on Pioneer Day saying I had pioneer heritage. I looked through the list and found the name Gudmundur Gudmundson. I thought it must be a different one but I did some research and it’s true — the Gudmundur Gudmundson is my great-great uncle.

In 1852, he found the LDS Church in Denmark and asked Church Headquarters to send missionaries to his home country. Several Icelanders were baptized. Many of them later moved to Utah, and Brigham Young sent them to settle Spanish Fork.

Part of Icelandic tradition is a close family. I’ve been married to my husband, Terry, for 47 years and have five children, 23 grandchildren, one great-grandchild and two more great-grandchildren on the way. They all live within 10 minutes and we have Sunday dinner together every week.

For the 100th anniversary of the Icelandic Association of Utah, we wanted to invite the president of Iceland, Olafur Ragnar Grimsson. I expected that he would say no, but he wrote back and said he would love to come .

In 2005, we put up a great big memorial with all 315 names of everyone who came from Iceland. We invited President Grimsson again and President Gordon B. Hinckley dedicated the monument.

When I think about what President Hinckley said during the dedication, it still brings tears to my eyes: “I know of no other group in the Church which has kept as you have done, the association of your homeland fathers with the land in which this generation now lives. It is a wonderful thing because it speaks of appreciation and love and respect for those who have gone before.”

My husband and I always planned to serve a mission. The stake president asked to meet with us, and we were called to the Denmark Copenhagen Mission. We were very surprised because we thought the church didn’t call missionaries anymore. We had six weeks to prepare and served for a year capturing pictures of census records, participating in the branch and being the 12-Step Recovery Program facilitators.

This summer I went with a group of 39 Western Islanders (people who immigrated west from Iceland) to see our heritage. It’s the eighth time that I’ve taken a group back, and we’re already planning the 2019 trip.