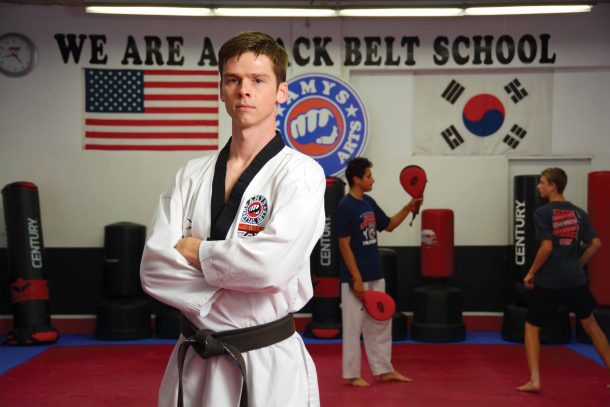 Jared Reed trains at AMYS Martial Arts in Orem and enjoys the city where he lives. “The mountains are right there and it seems like any store you need is in the vicinity,” he says. (Photo by Dave Blackhurst)

I got kicked out of karate — not by the instructor but by my parents. At daycare, another kid took my action figure toy so I kicked him. After that my dad kicked me out of karate. Six months later, my uncle recommended I try taekwondo. So at 8, I started. Then I began teaching when I was 12.

I would say my biggest achievement was the World University Championships. I received a bronze medal there in China. This year I competed on the Fourth of July in Detroit for Nationals. I had five matches and I beat everyone so I made it to first place.

Before moving to Utah, I was living in Oakland, California. The training there was absolutely wonderful, but the environment was more negative than positive. I saw myself progressing as an athlete but not outside of the athlete lifestyle. I met my girlfriend at a taekwondo event in China, and things ventured off from there into a relationship. We’ve been together for more than two years and I moved to Utah to be closer to her.

I’ve had two knee surgeries, one in 2010 and another in 2014. Both were for torn meniscuses. Recovery sounds like a short time because it was only two months, but not training for two months takes a toll on an athlete. The hardest part is getting your body back to where it was before and understanding that it takes time. You can’t rush into it.

Teaching and coaching are really cool opportunities. It’s a whole different side than being just an athlete. I get to take the skills, intelligence and knowledge I have and instill that in other people. I’m not your typical, “It’s OK, you can do this,” kind of guy. I’m more, “Let’s go, get up.” I believe in a little bit of comforting but really pushing them to do something.

My favorite moments during practices are not about me but about others and seeing them progress.

Mentally, taekwondo is really good for you. It teaches how to be a better person and how to balance life.

The five tenets of taekwondo are courtesy, integrity, perseverance, self-control and indomitable spirit. Each one has an effect on people. When you put all five together, that’s what I want people to take away from taekwondo.

I don’t have Olympic dreams. I have other big goals like to have a good house and a good career. My biggest goal is to better myself and the people around me.