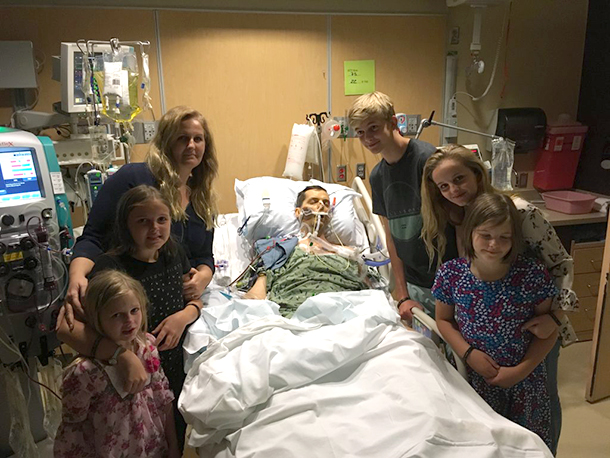 Before pulling Amos Abplanalp off of life support, his wife, Hillary, and five children got to spend one-on-one time with him to say goodbye. (Photo courtesy of familyman.org)

After a year-long battle with stage 4 colon cancer, Amos Abplanalp died after being taken off life support on Thursday afternoon.

Abplanalp’s story took center stage when his daughter, Evie Clair, shared his story on “America’s Got Talent.” Clair advanced to the finals on Wednesday night after being saved by the audience. But that high was met with a low as the show helped Clair and her mother fly home to Arizona immediately following the live results show so that she could be with her father before he died.

“We are so thankful to them for their kindness and understanding,” Clair’s mother, Hillary Abplanalp, wrote on the family blog. “Simon isn’t the only one who gets emotional about Evie Clair. Dozens of producers and staff members are going through this challenge with us and we love them for it.”

Before Amos Abplanalp was taken off life support on Thursday, each of his five children were given time to say goodbye to their father, including Clair. The family surrounded him as he took his last breathe at 3:30 p.m. on Thursday, Sept. 7, just 15 minutes after being taken off of life support.

Amos Abplanalp was present for Clair’s audition on “America’s Got Talent” in June, but was unable to attend live performances because he was hospitalized. Clair has dedicated most of her performances — which most recently was “Yours” for the semifinals — to her father.

“Evie, Evie, Evie, I’ve said this before but you are gutsy. You really, really are and let me tell you something: this song is beautiful, your voice is beautiful… You made (this song) your version,” an emotional Simon Cowell, a judge on the show, told Clair following her performance Tuesday. “Your tone, your pitch was stunning and laid back and let me tell you, your dad is going to be so proud of you.”

Prior to her performance on Tuesday, “America’s Got Talent” showed a series of home videos of Clair with her father.

“‘America’s Got Talent’ is this bright light in our lives,” Evie Clair said in a video for the show. The song used for background music is an original song, “OK Day,” that Clair wrote with her siblings Kirra and Porter earlier this year that has not yet to be released, according to Clair’s website.

Clair paid tribute to her father on Instagram with picture memories and a few words:

“Say a prayer, a prayer on forever Time is only now, Soon we’ll be together.” I hope I made you proud, Daddy. I’ve always done it for you and I’ll do it for you forever.❤️

The family has a GoFundMe account to help with medical expenses here.