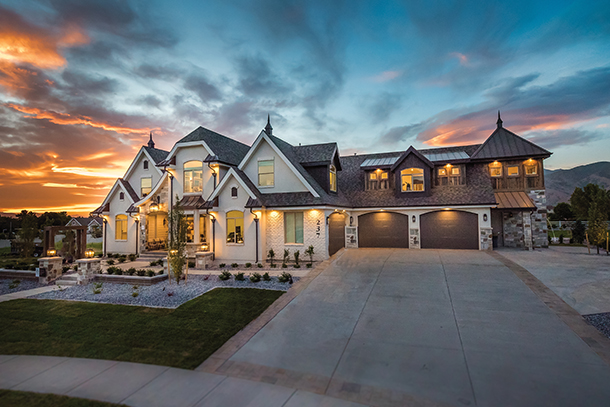 After opening day of the Parade of Homes, a warm sunset fell upon the Harrison’s home. Sunsets had taken on more meaning to the Brinkerhoff family since the death of its patriarch, Roger Brinkerhoff, and signaled a pleasing end to the complicated building process. (Photo by Brandon Garrett)

On a bend in the road in a gorgeous neighborhood just south of the heart of Mapleton is a home remodel project that welcomed 11,261 visitors during the 2017 Parade of Homes and earned the People’s Choice Platinum Award for favorite home.

This beautiful home deserved the award, but it was never intended to  show in the Parade.

But it did. And in the process, not only was a home healed, but so was a homeowner and a beloved local business. 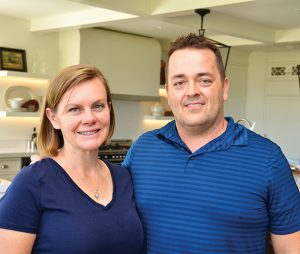 Homeowners Justin and Keri Harrison love Mapleton and were excited in 2014 when they found a bank-owned house that needed some tender loving care.

“I like to remodel homes,” Keri says. “This home had been on the market for a long time and needed some love. We thought we’d make it better and eventually sell it.”

One striking feature stood out to Justin in the Tuscan-style home.

“The whole thing was brown,” he says.

The home, which was built in the early 2000s, also included 300 can lights and other questionable design choices that Justin and Keri — mainly under Keri’s direction — wanted to fix.

Or, more accurately, pay a professional to fix.

“We have eight boys and an international business we run together,” Keri says. “It was never our intention to do the remodel ourselves. I grew up with a builder as a father and value the trades and their craftsmanship.”

On a day in late July 2014, Keri sent a text message to Roger Brinkerhoff, owner of Brinkerhoff Custom Classics and a former member of her LDS ward. Unknown to her, Roger was laying in a bed at the Huntsman Cancer Center in Salt Lake City.

“She texted him and asked if he would meet with her about doing the remodel,” remembers Alyce Brinkerhoff, Roger’s wife and business partner. “I answered back as if I were Roger and said, ‘That sounds great, but I’m having some health problems. Would you meet with my son, Dustin?’”

Despite having been fighting cancer for some time, Roger’s death a few days later — on July 31, 2014 — was unexpected. And extremely difficult.

“It threw us,” Alyce says. “We had to decide how we would move forward as a family and as a company.”

Roger and Alyce’s oldest son, Dustin, had been working side-by-side with them for 12 years and knew the business. However, he didn’t have Roger’s reputation — or even his contractor’s license. A few transitional steps later, Alyce and Dustin realized the call back to Keri was going to be a big part of moving forward. 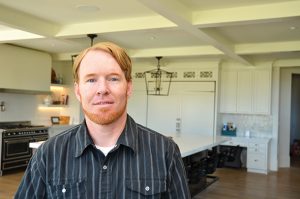 Builder Dustin Brinkerhoff said, “People walked in here and felt at home. A big part of that is because Keri and her sisters did the decorating. It’s genuine.”

Brinkerhoff still had relationships with some of the best subcontractors and suppliers in Utah Valley and called on many of them — including electrical contractor Mike Schwartz of AMP Services — to remodel the Harrison’s home into the 10,056-square-foot masterpiece it became.

“Dustin is more artistic than others I work with,” Mike says. “He can have a grand vision of things and find a way to make them work. He draws a lot. To see what he draws come together is really cool.”

Keri’s love for the Utah Valley area was right at home when it came to choosing suppliers.

“As we would make decisions, Keri was always asking, ‘Who is the local supplier of this?’” Dustin says. “Carpet. Fireplace. Everything. Her basis of this whole thing was improving the neighborhood and the surrounding community.”

“We, as people, grow from other people,” Keri says. “People need people. Builders don’t have work unless I go buy a house to remodel. I don’t have a finished project if I don’t have them.”

With a large project like the Chateau Blanc, Brinkerhoff doesn’t just work with clients for weeks or even months. The relationship lasts for years.

“If someone wants to remodel a home, they need to be realistic,” Keri says. “Even with a contractor, you’ll have a second, part-time job. You get to know the contractor.”

The Harrisons and Dustin had successful interactions from the start, but partway through the process, a miscarriage left Keri struggling emotionally and unable to work through details of the house. It was a low-point and part of a realization she was suffering from postpartum depression.

“We had to stop the process for a time,” Keri says. “You go through life events together with a builder. You have to be an adult and have realistic conversations and work through things.” 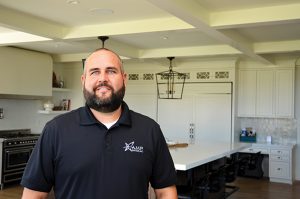 Electrical contractor Mike Schwartz of AMP Services said, “We had to do a lot of things on a moment’s notice, so we stayed in communication all the time. We were adjusting, tweaking and moving things all the time. We feel like these are our projects. I want to build a Parade home like it’s my own house.”

To Parade or not to Parade

Dustin was excited to become involved in the Utah Valley Home Builders Association — following in the service-minded footsteps of his father — so he volunteered to serve on the Parade of Homes committee for 2017. As a few builders had to drop from the Parade, Dustin began to contemplate entering the Harrisons’ masterpiece.

“We knew Keri loved the Parade, and the timing worked out to where the option was there,” Dustin says.

He talked with the staff of the UVHBA to even see if it was still an option. UVHBA’s director of events, Amber Hutchings, enthusiastically encouraged them to enter the house, despite the late date.

Then, Dustin had to bring it up to Justin and Keri.

“We tried to scare them away from doing it,” Alyce says. “We showed them what it would cost. There was some apprehension on our part, too. This was our 14th Parade home as a company, but it was Dustin’s first. He wanted to make sure it was at the level of the other homes we’ve entered.”

And then there was the matter of reaching out to the people performing the work on a tightened schedule.

“We also had to have buy-in from the subcontractors,” Dustin says. “This was asking a lot of Keri and Justin, but also of our subs. Some amazing stuff had to get done in the final nine weeks.”

Mike recalls being apprehensive about the prospect of getting the home done for the Parade.

“There were things that needed to be done — even concepts that needed to be worked through,” he says. “Plus, it’s a busy economy and we have a lot of work. But we’d put our heart and soul into this job. Windows opened in our schedule. It was remarkable.”

For Justin and Keri, the answer came after quiet contemplation, discussion and prayer.

“Our biggest concern was whether our floors would hold up to 10,000 people walking on them and if things would break,” she says. “We had some concern about privacy, too. Our answer, though, came very clearly. People are more important than things. This event brings people together. And the people going through our home during the Parade were great.”

During the Parade, Keri spent as much time as possible in her home (she also wanted to see other Parade houses). She loved answering questions and engaging with Parade attendees. Justin rented out space in his own garage and turned it into a doTerra store. The family’s eight entrepreneurial sons sold snacks. 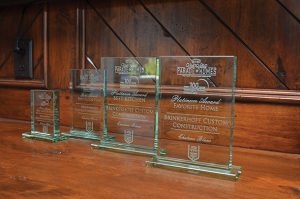 In 1989, Roger Brinkerhoff entered his first home in the Utah Valley Parade of Homes and was awarded the Judge’s Choice for best house.
Roger passed away, which made the 2017 recognition for Brinkerhoff Custom Construction even more meaningful for his son, Dustin, who now runs the business.
The Brinkerhoff home earned People’s Choice Favorite Home and Best Kitchen. The home was also recognized for its master suite (silver recognition) and floorplan (gold recognition).

In Roger’s last days, the staff at the Huntsman Cancer Center placed him in a room that looked west over Salt Lake City. One of his daughters was doubtful she could run an errand and not miss her father’s passing.

Roger quietly leaned over to her and whispered, “You’ve got time. I’m going to wait for the sunset.”

“Since then, sunsets have meant a lot more to our family,” Dustin says.

At the end of the opening day of the  Parade of Homes, Roger and Alyce’s son-in-law, Brandon Garrett, was driving to the house to take photos.

As he approached the house, a vivid sunset lit up the sky.

“Dad was watching over us through the entire process,” Dustin says.