5 plays that changed the game for BYU against Utah 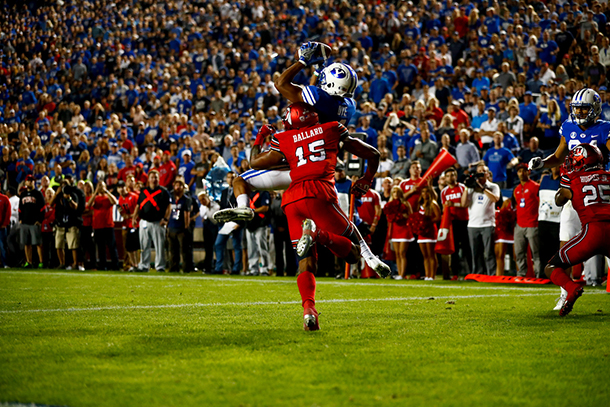 BYU’s Trey Dye catches the ball in the end zone during BYU’s game against Utah at LaVell Edwards Stadium. (Photo by BYU Photo)

Once again, BYU came up a few plays short in a rivalry game with Utah.

The Utes ran their winning streak to seven straight over the Cougars after grinding out a 19–13 win on Saturday night. Tyler Huntley came up big for Utah, throwing for 300 yards on 27-of-36 passing and rushing for 89 yards and a touchdown on 19 carries.

BYU made some progress on offense from its disastrous outing against LSU, totaling 233 yards overall. Still, the Cougars struggled with turnovers and poorly timed penalties. They also converted just 6-of-15 third downs.

“We saw some successful things out there,” BYU head coach Kalani Sitake said. “It was nice to see our offense clicking at the end. We dug a hole early on in the game with turnovers and interceptions and we put our defense in some bad situations. I am not happy about it, and I am going to fix it. We need to fix the problems we are having on offense. It is frustrating that we couldn’t put together a drive to win the game.”

Five plays, in particular, defined the game for BYU in their second straight loss to a P5 opponent this season.

Tanner Mangum turned in another rough performance. The junior totaled just 170 yards and a touchdown on 21-of-39 passing. He threw three interceptions. His second one on BYU’s opening drive of the third quarter proved most painful.

With BYU facing a 3rd-and-3 from its own 32 yard line, Lowell Lotulelei batted down Mangum’s pass at the line of scrimmage. It fell into the waiting arms of Filipo Mokofisi at the 29 yard-line. Mokofisi rumbled six yards to the 23.

“Without the defensive line, there’s no turnovers,” said Utah defensive back Boobie Hobbs, who also intercepted Mangum in the first quarter to set up Utah’s first field goal. “There’s no picks. You know, those guys play a hell of a game by getting pressure and when they get pressure, we get picks, so we like it.”

It cost the Cougars dearly. Utah needed only three plays to cash in the turnover and scored its lone touchdown of the game on a 5-yard keeper by Tyler Huntley, after he faked a handoff, to take a 16–0 lead with 12:49 left in the third quarter. 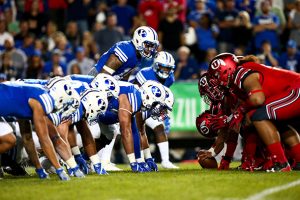 BYU did not get on the scoreboard until the third quarter when Ula Tolutau punched in a 1-yard run. It almost didn’t turn out that way.

The Cougars had an excellent chance to take the lead in the second quarter. They drove down to the Utah 3 after a targeting penalty on Ute linebacker Sunia Tauteoli kept the drive alive. Mangum finished the drive off with a 3-yard go-ahead strike to Talon Shumway. His touchdown was wiped off the board, however, when Aleva Hifo was called for offensive pass interference after getting caught making a pick play.

“We need to execute better,” Sitake said. “We practice the routes plenty of times in practice. Nobody feels worse than Aleva right now, but we need to fix our mistakes.”

Hifo’s mistake forced BYU to settle for a 27-yard field goal attempt from Rhett Almond. The kick from Almond sailed wide left after a bad hold following the snap. Utah answered by punching in a 25-yard field goal from Matt Gay on the ensuing drive to take a 6–0 lead.

Utah appeared poised to put the game out of reach after Mangum threw his third interception on BYU’s second third-quarter drive. Fred Warner kept the Utes from pulling away with a huge defensive play.

On Utah’s first play, following Jaylon Johnson’s interception at the Ute 25, Huntley fumbled the snap and Warner pounced on the ball at the 22. His fumble recovery gave the BYU offense a fresh spark. The Cougars marched 22 yards in five plays and scored on Tolutau’s 1-yard run to cut Utah’s lead to 16–6 with 9:47 left in the third quarter.

Tolutau gained all 22 yards on that drive and may have cemented a bigger role for himself in BYU’s offense going forward this season.

“It definitely felt good to go in the game today and get some touches,” Tolutau said. “It felt good to finally get running.” 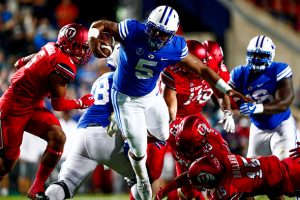 Ula Tolutau runs the ball to the end zone. Tolutau scored the first BYU touchdown of the night. (Photo by BYU Photo)

Facing a 4th-and-1 at the BYU 19 late in the fourth quarter, Utah opted to gamble instead of playing it safe. The Utes passed on sending out Gay to kick his fifth field goal of the night and instead drew up a run play for Zach Moss.

Utah’s risk backfired. Matt Hadley stayed on the outside and cut off the running lane for Moss. He smothered the sophomore running back for a five-yard loss.

This fourth down stop gave BYU new life. The Cougars marched 76 yards in 11 plays, culminating in a 7-yard pass from Mangum to Trey Dye, to cut Utah’s lead to 19–13 with 2:38 left.

After holding Utah to a 3-and-out, BYU got the ball back with 1:34 remaining in the game. The Cougars had to drive 91 yards to score a potential game-winning touchdown. BYU never got outside its own 20.

Facing a 3rd-and-4 from the 15, Mangum hit Beau Tanner with a short pass just beyond the first down marker. Tanner dropped the ball before he hit the ground. It suddenly put BYU in the spot of needing to convert a fourth down. Mangum threw a wounded duck pass to Matt Bushman under heavy pressure and it fell incomplete.

Utah took over with 57 seconds left and took a knee to run out the clock.

“We shouldn’t have to rely on our defense all the time,” Bushman said. “They’re a great defense but we need to help them out. They’re on the field a long time.”

Home run: Sisters team up to hit all 31 homes in 2017 Utah Valley Parade of Homes Next post