Home Things To Do Events Home run: Sisters team up to hit all 31 homes in 2017 Utah Valley Parade of Homes

Home run: Sisters team up to hit all 31 homes in 2017 Utah Valley Parade of Homes 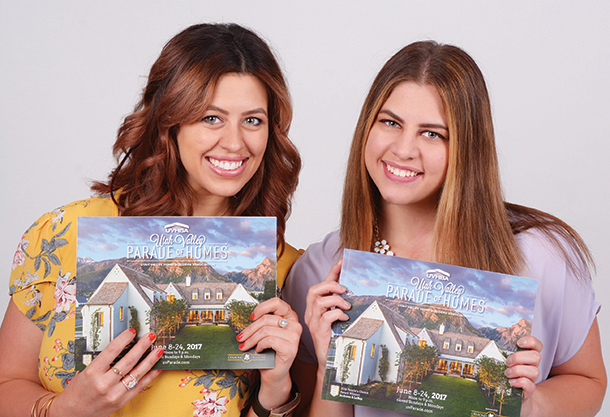 Devoted Kellyanne Malbica (left) and Talia Malbica attended the Parade of Homes for the first time in 2016. They quickly became hooked and the sisters visited all 31 homes in the 2017 event. (Photo by Dave Blackhurst/UV Mag)

Two years ago, Kellyanne Malbica and Talia Malbica had never entered a single home in the Utah Valley Parade of Homes. They went from zero to Parade hero this year on June 24, when the Malbica sisters finished touring Home 19, “The Winnie Cooper” by Journey’s End Homes, which completed their tour of the Parade’s 31 homes.

While the average ticket holder visited 10 of the homes this year, the Malbicas got their money’s worth. Their rare experience of completing the home circuit landed them in the Utah Valley Magazine offices for a photo shoot and interview.

UV: What draws you to the Parade of Homes?

Kellyanne: We’d seen advertisements for the Parade of Homes and always thought it would be fun to go, but we didn’t actually go until last year. It’s a fun thing for us to do together. We set a goal to visit every home this year and having that goal made it more fun.

Talia: I’m drawn to the interior aspect. I like seeing the upcoming trends of the season and how they follow them in each house.

UV: How did you make it to all of the houses? What was your strategy?

Kellyanne: We knew from the beginning that we wanted to hit all of them because that’s what we thought people did. We didn’t know this was unusual until you reached out to us. (Laughs)

Talia: We both work, so we had to juggle schedules and do them when we could both go. That means we saw a lot of homes on Saturdays.

Kellyanne: The most we ever did in one day was eight. We planned based on where the homes were. We would try to hit all the ones down south at one time. We started with the ones closest to where we live (Kellyanne lives in Orem, Talia in Provo).

UV: What do you enjoy seeing in a home?

Kellyanne: We have different categories of homes in our mind. There are some we could live in. Others are mansions that I love seeing, but they can be a little overwhelming. Plus, it seems like they all have slides in them. (Laughs)

Talia: I like the ones you walk in and feel cozy. It just makes you want to get your stuff and move right in.

Kellyanne: Davies Design + Build (Home 13).  That was such a winner for me. I loved the openness. The colors. It was big, but still felt homie and cozy. It was functional. Plus, it had an apartment downstairs that I wanted to move into. I liked the green backsplash. I like green. It was a little bright, but I thought it was cool.

Talia: I liked the Flagship Home (Home 15) in Vineyard. Studio McGee staged it and did a great job. I loved the emerald kitchen. It was a home I could see myself living in and it was beautifully designed.

Kellyanne: Home 6 (E&L Custom Homes, Inc.) was an early favorite, too. The outside was gorgeous with the copper.

UV: How did you use social media to enhance the Parade experience and interact with others?

Kellyanne: The Parade is a social experience. I have clients who will want to talk about some of the homes — especially after they see me post. We Snapchat every house we’re at. We also follow a lot of the builders and designers on Instagram.

Talia: Some of the builders showed previews of the home and updated followers on the building process. It made it more fun to then see the finished product.

A few of their favorite things

“I loved the exterior,” Kellyanne says. “The colors were bold and I like balconies. It was cool.”

“We’re big fans of Millhaven,” Kellyanne says. “We follow them on Instagram. Anything they do, we like. Theirs was our favorite home last year and was one we made sure we hit. I love the layout of their home this year. They have big, cool open kitchens.”

“The location was great and I loved the big windows,” Talia says. “They brought in tons of natural light.”

“I thought it was very cool and modern,” Talia says. “Hip. That’s the word I would use. It was very hip.”

“It felt futuristic to me. It was like the cool, modern Jetson’s house,” Kellyanne says.

“I liked the completely separate apartment upstairs,” Kellyanne says. “I kept wondering how I could move into one of the apartments in these amazing houses.” (Laughs)

“There was a cool extra building and I loved the chain lighting fixture,” Kellyanne says.