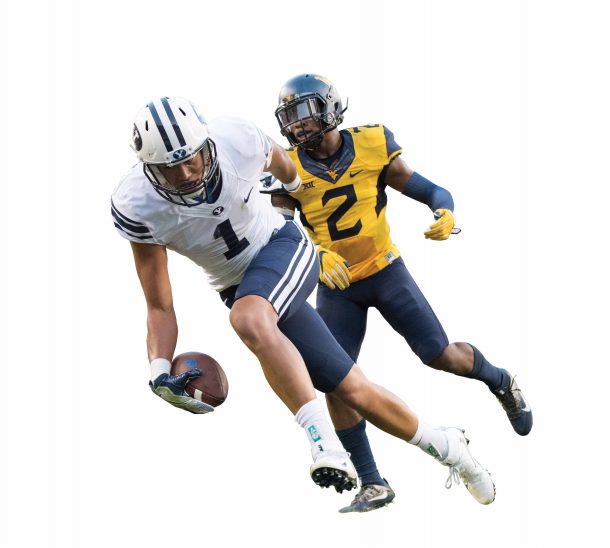 Junior Moroni Laulu-Pututau came to BYU as a lean wide receiver, running up sidelines and diving for balls at the end of a fly route.

In fact, his freshman season, he averaged 18.7 yards a catch with a long of 54 yards.

But, when offensive coordinator Ty Detmer returned to Provo last season and declared the need for a tight end tradition like he knew when he played here in the 1980s and ’90s, Moroni jumped at the chance to make the move to a three-point stance.

“I was really excited about the chance to switch. There are more opportunities for me personally, but I also think it’s better for the team to have me there, too.” — Moroni Laulu-Pututau, Jr., BYU tight end

“I was really excited about the chance to switch,” he says. “There are more opportunities for me personally, but I also think it’s better for the team to have me there, too.”

BYU’s depth at receiver and Moroni’s physical frame made the position change a winning idea. In the offseason, Moroni added 22 pounds to his body and hasn’t felt a significant loss of foot speed — meaning match-up problems for foes.

“I was worried about losing speed, but I haven’t missed a beat,” he says. “My top end still feels great.”

And mixing it up with defenders is an added bonus.

“I didn’t know blocking like this was so much fun,” Moroni says. “There’s nothing quite like pulling and hitting an outside backer. It’s an adrenaline rush.”

The two served together in the Chile Antofagasta Mission.

“I’d heard of him before the mission but had never met him,” Moroni says.

About six months into his mission, Moroni first met Tanner, and the two quickly bonded over their mutual commitment to the BYU football team.

“The first time we met, I saw him on the bus and he was, like, 230 pounds,” Moroni says. “He was looking a little chubby. I still give him a hard time about looking more like a linebacker than a quarterback.”

But did the two ever throw a football together in the southern hemisphere?

“Not much, but we did throw the ball around a little on our days off,” Moroni says. “We would say, ‘Hey, we are going to be doing this in a year or so at BYU.’”