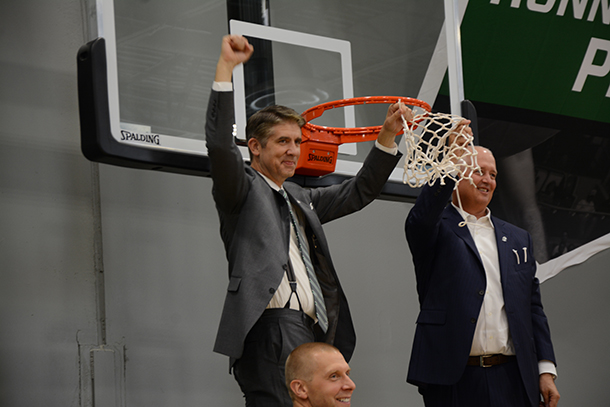 After fighting for space at the UCCU Center for years, Utah Valley University’s basketball teams now have a home to call their own.

UVU cut the net to the NUVI Basketball Center on Wednesday afternoon signifying the official opening of the facility. Cathy Nixon, UVU women’s basketball coach, has been with the program for 22 seasons. In the June 2016 groundbreaking, Nixon said she had to work around lions, tigers, bears, the circus, motocross and a large variety of shows and businesses that had come to perform at the UCCU Center throughout the years. Now her team can cut its own gym circus act.

“Today we are going to be cutting down nets and when I thought about it, it symbolizes a championship,” said Nixon. “It symbolizes doing something really, really special. To me, those of you who have donated and provided us the opportunity to have this practice facility provided the ladder for us.”

While the ribbon cutting wasn’t until Wednesday, the players have been practicing in the building for five weeks.

“We wanted you to come in and see a really clean building, but we didn’t want that as bad as we wanted to get to work,” joked Mark Pope, UVU men’s basketball coach. 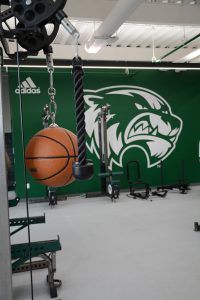 The Travis Hansen Strength & Conditioning Center has a net mesh separating the weight room from the basketball court. (Photo by Rebecca Lane/UV360)

New state of the art technology allows the coaches to track the effort their players give on the court in the NUVI Basketball Center. Because of this technology, Pope shared that in just five weeks of having the practice facility available that  players had already shot 150,000 basketballs and run more than 800 miles on the floor.

“If you are searching for greatness, you can’t live 9 to 5,” Pope said. “If you’re trying to quiet the naysayers and silence the doubters and do something nobody thinks you can do, it can’t be an eight-hour workday. If you’re chasing dreams, the really big dreams that inspire people, but they are so big and so scary that you’re scared to utter them out loud. If those are the dreams you’re chasing, you can’t do it in 40 hours a week. That’s what this building has been to our players already.”

Located on the south side of the UCCU Center on UVU’s campus, the NUVI Basketball Center was designed by Method Studio and cost $4.4 million. It includes an 8,000 square feet court space with nine basketball standards and graphics to create a game atmosphere to match the UCCU Center. A mesh wall separates the court from the 1,900 square feet of strength and condition space, named the Travis Hansen Strength & Conditioning Center. The offices for the men’s and women’s coaches, which make for 3,000 square feet, are on the second level. Outside of the offices is a mezzanine level that overlooks the courts.

Standing on the court and pointing at the basketball team gathered in the back of the gym, Keith Nellesen, NUVI CEO and title sponsor of the basketball center, said: “We do these things so that you guys can achieve you dreams.”

“For you who are trying to do something extraordinary, it requires an extraordinary amount of effort. There’s a lot of things you have to do and it’s my hope that gym will help you to do that.”

The NUVI Basketball Center was entirely funded by community donors.

“So we have a lot of dreams. We’ve got energy and we’ve got drive. What we don’t always have is resources,” shared UVU President Matthew Holland. “And that’s what all these folks in this room have done. You can dream all you want, but if you can’t go make it happen, it’s not going to go anywhere. So we are so grateful for how this community has rallied with the institution and these students.”