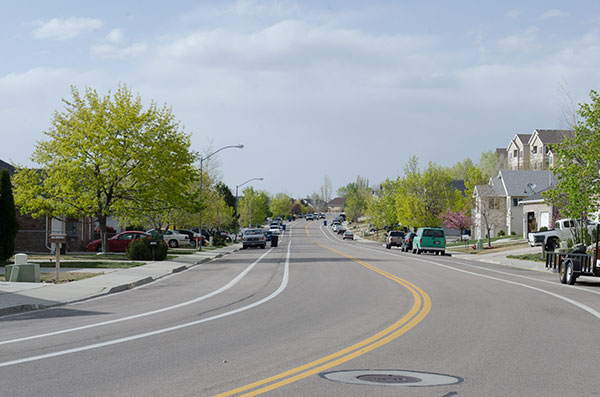 Southeast Provo is home to a large group of young single professionals. (Photo by Rebecca Lane/UV360)

“This is a great place to be.” “Zoning laws are not discriminatory.” “My family feels very upset, very discriminated against and very hurt.” “They’re hoping zoning laws will get rid of us.”

If you live in Provo, you probably know that there’s some tension in neighborhoods between renters and homeowners. And between families and young single professionals. The tension has been building for years, with parking problems in neighborhoods, over-occupied apartments (or the perception of over-occupied apartments) and new large complexes replacing single-family homes or open space.

Over the years, the city has passed occupancy laws defining what a family is, and allowing up to three unrelated singles to live in a home. There are some exceptions to this rule, mostly around BYU. But the issue has come to a head recently with a proposal before the city council that would require letters attached to rental contracts outlining the allowed occupancy rate and the penalties for violating the law. So on Wednesday night, Provo councilmen David Harding and Dave Sewell hosted a meeting to get input from Provo residents on the issue as well as from a panel discussion.

So what’s going on?

Single people need somewhere to live. They work in the area and want to live in Provo. The problem is the housing supply. BYU students take up a lot of housing around the university, and married couples and families everywhere else. So people who don’t fit into those categories — single professionals — need somewhere to go.

They’ve moved into available spaces in neighborhoods all over the city. And many of them have landed in the southeast part of the Provo, just a little away from BYU.

Sabrina Huyett said she’s a teacher, homeowner and recently started a community garden in her neighborhood. And she’s not married, and has roommates.

“We want to live in a community, not in isolation,” she said. “I think if we can blend these two community together it will bring strength to both of us.”

“We want to live in a community, not in isolation. I think if we can blend these two community together it will bring strength to both of us.” — Sabrina Huyett, Provo resident

Adam Arnett says he’s lived in Provo since 2008. He’s run software companies, worked in venture capital, done business consulting and more. He pays taxes and contributes to the community. “I feel like I’ve more than chipped in,” he said.

But what he hasn’t done is gotten married or bought a home. So he says what he’s done doesn’t seem like enough for some people. Because unless you follow the right script, you don’t “merit belonging in Provo.”

He said cities around the county actively campaign to attract this demographic of young single professionals. “We are cash cows. We work, spend and rarely consume city services.”

Harding said the biggest problem in Provo is the lack of housing. Because of the lack of housing, single-family homes now house groups of single people instead of families. And when multiple people move into what was once a place that housed a family with children, they usually add cars.

And that creates a parking issue, and adds to tensions with neighbors.

Carl Mitchell said he lives in an area where a developer built a condo complex. The units were supposed to be capped at three occupants, but that hasn’t happened because they have three or four bedrooms. The result —”nobody can find a parking place, ever.

However, another participant pointed out that she lives in southeast Provo with her family of three. And they have four cars, so it’s not just single professionals who are adding cars to the area.

Another issue is what’s happening to neighborhoods, schools and churches in areas that used to be populated by families.

“I feel because of the dishonesty of landlords, that low-income families, the youth and elderly are being victimized. It has very little to do with not wanting to live by singles.” — Hannah Peterson, vice chair of the Provost neighborhood

Hannah Peterson, vice chair of the Provost neighborhood, said people have bought up houses in the neighborhood to be rentals. But landlords found they could make more money renting to more people. So instead of renting to a family, some are breaking the law and renting to four or more singles. In one house, the rent changed from $1,300 per month to $2,400.

That rent may not be affordable for a family, but it can be split between singles. As a result, families can’t afford the rent in the area, she said. And now her ward only has one girl in the Young Women’s program. And the schools are hurting as well.

“I feel because of the dishonesty of landlords, that low-income families, the youth and elderly are being victimized,” she said. “It has very little to do with not wanting to live by singles.”

Many people at the meeting on Wednesday agree that the two groups need to work together to find a solution. Huyett suggested making laws about the problems, not about the people. If there’s a parking problem, legislate parking. If there’s a noise problem, pass a new noise ordinance. Some of the solutions participants discussed included:

• More housing: Harding said he hopes new construction projects will help relieve some of the tension between the two groups. “Integrated communities are healthy but I think we need to be better at providing housing,” he said. The additional housing, including a large project on 4800 North, may be better designed for single professionals.

• Parking: Some suggested that the city focus on parking limits instead of occupancy. “I think it’s a good idea to limit the number of cars per property based on zone,” said Provo resident Roger Brown.

• Landlords: “Our main issue is with landlords,” Peterson said. She suggested that the city pass laws to protect property rights. Jeremiah Maughan suggested putting up billboards in areas so people know what the allowed zoning is, because they might not know they’re breaking the law.

Sewell suggested that the groups get together and craft a proposal to bring to the city council. The city council will hold an open house next week to talk about rental law.