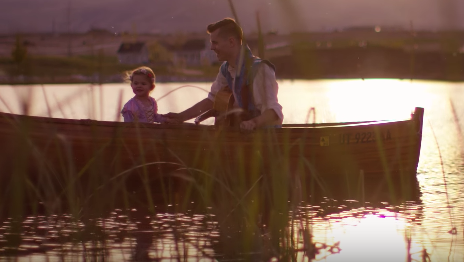 Claire Ryann and her dad in their “Tangled” music video. The father-daughter pair will perform at Spanish Fork’s Harvest Moon Hurrah.

School has officially taken over the valley, but attendance at these fun weekend events is mandatory. Take a break from hitting the books and enjoy a weekend of fun in September with these Utah Valley events.

Filmquest is rolling out the red carpet at the Covey Center for the Arts this weekend. The 4th annual festival features independent horror, fantasy and sci-fi film genres and will award filmmakers in 30 different categories.

When: Sept. 8–16
Where: Covey Center for the Arts
Cost: $8 per screening
Site: filmquestfest.com

Bad becomes good (sort of) at Thanksgiving Point this weekend. The heroes and villains are teaming up to raise funds for the Utah Food Bank — but at the same time they are competing against one another. Compete in the soccer skills challenge or take down the opposing team’s tower in the 5K Tower Battle at 7 p.m. Plus, dress in your most heroic or villainous attire to participate in the costume contest.

No. 14 BYU women’s volleyball team — which defeated the University of Utah in a five-game thriller Thursday night — drives across the Provo-Orem border Saturday night for a crosstown challenge. The Wolverines have yet to beat the Cougars as BYU has won all 12 of its previous contests.

The stage is relentless, especially with the play-within-a-play comedy, “Noises Off.” Anything and everything that can go wrong will go wrong as a troubled director attempts to put together a Broadway-bound British farce. Unfortunately, bad acting, missed cues and disastrous rehearsals curse the production. Prepare to laugh with this director’s cut of a comedy.

Do you have a Utah Valley event you want to add to the calendar? Email us at news@utahvalley360.com.