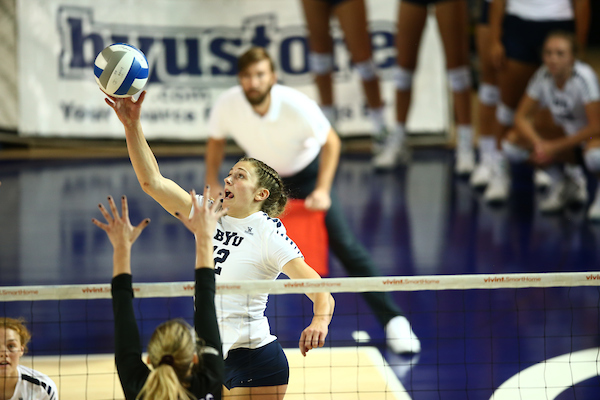 BYU outside hitter Veronica Jones-Perry tips a ball over Weber State’s blockers in a game at the Smith Fieldhouse on Friday, Sept. 15. (Photo by BYU Photo)

Utah Valley was seeing double this week as the BYU and UVU women’s volleyball teams swapped opponents, playing against the same in-state teams capped off with a head-to-head matchup on Saturday night.

Both teams faced Weber State and No. 16 University of Utah during the week before facing off in the UCCU Crosstown Clash.

The Cougars and Wolverines then competed in the Crosstown Clash Saturday night in Orem. In a tight match, the first three sets went back and forth but BYU ran away with it in the fourth set to win the match (25-21, 22-25, 26-24, 25-17). Outside hitter Veronica Jones-Perry led the Cougars with 23 kills while setter Lyndie Haddock contributed with 46 assists. Senior Cosy Burnett had seven blocks and McKenna Miller added 13 kills in the victory.

“I’m really proud of the team effort and how hard we fought tonight,” said BYU head coach Heather Olmstead in a press release. “Utah Valley played great and put pressure on us where we had to respond. Roni, McKenna and Cosy really carried us offensively. I thought Mary was great in the back row passing and digging. Overall, it was a great team win.”

Coming up, the Wolverines head to Washington to take on Seattle University next Saturday. Meanwhile, the Cougars look to continue their dominance in California against Santa Clara University next Thursday.