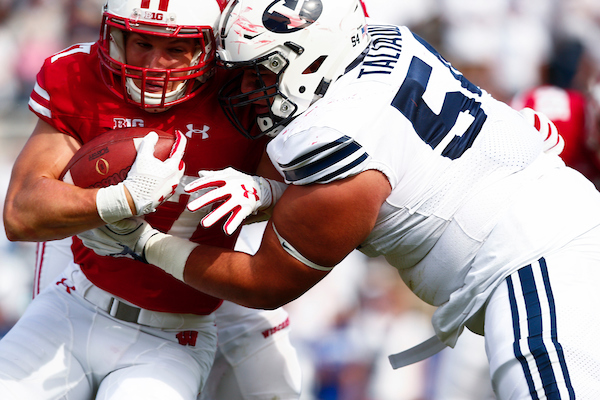 If you were as busy as the Cougars and Wolverines were this weekend, chances are you didn’t catch all the games. Here’s a quick recap of BYU and UVU’s competition.

Sophomore quarterback Beau Hoge made his first college career start for BYU as they faced No. 10 Wisconsin at LaVell Edwards Stadium on Saturday afternoon. An impressive Wisconsin defense kept the Cougars out of the end zone as they lost 40–6.

“Congratulations to Wisconsin,” BYU head coach Kalani Sitake said in a press release. “You can see why they’re highly ranked. I was disappointed with the result, obviously. We need to play consistently better on both sides of the ball.”

Hoge went 11-for-20 for 111 yards along with two interceptions in the loss. The Cougars will rest up with a bye this week and look to improve their record from 1–3 against Utah State on Sept. 26. Read “5 plays that changed the game for BYU against Wisconsin” here.

“I’m really proud of the team effort and how hard we fought tonight,” BYU head coach Heather Olmstead said in a press release. “Utah Valley played great and put pressure on us where we had to respond. Roni (Jones-Perry), McKenna (Miller) and Cosy (Burnett) really carried us offensively. I thought Mary (Lake) was great in the back row passing and digging. Overall, it was a great team win.”

The UVU loss drops them to 5–10 on the season. Read about all the in-state competitions from the past week here.

BYU women’s soccer loses a tough one in overtime

The Cougars traveled to Arizona for a game against the University of Arizona on Friday. After trailing 1–0 at halftime, the Cougars fought back with a tying goal by forward Madie Lyons Mathews in the 73rd minute. By the end of regulation, BYU had 11 shots compared to the Wildcats’ seven, but it was the Wildcats who took the 2–1 win with a goal in the 92nd minute.

BYU fell to 1–4–3 on the year with the loss but will look to bounce back on Monday against Kansas in Provo.

Both the men’s and women’s UVU soccer teams took losses on Sunday. The men’s team lost 3–1 at home against the University of Nebraska Ohama. The loss dropped them to 3–3 on the season.

The women’s team played an away game against North Dakota State. Despite recording 15 shots, including nine on goal, the Wolverines lost 2–0.

“Obviously we are pretty disappointed,” head coach Chris Lemay said in a press release. “We won nearly every statistical category today except for the one that matters most. We are at a point now where we have to do a big gut check. We have a ton of potential but at the end of the day we need to dig a little deeper to get the results that we want.”

The loss puts UVU at 3–7 on the year. They will look for a big win against BYU this Friday, Sept. 22 in Provo.

Secrets to networking, productivity + inspiring a team Next post