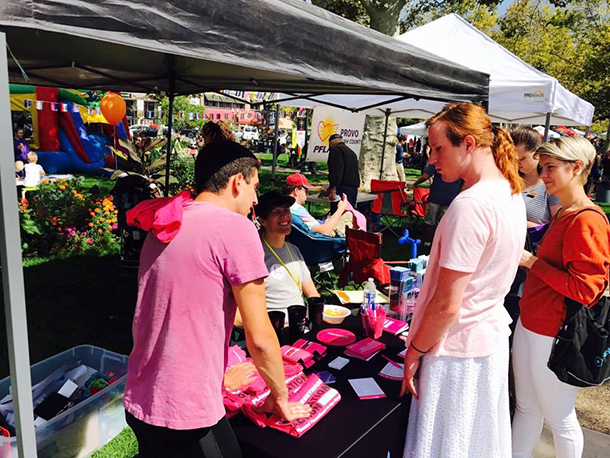 For the first time, the Provo Pride Festival moved to downtown Provo, according to the Daily Herald. After spending its first four years at parks around Provo, the Provo Pride Festival was finally able to hold a festival where most Provo festivals are held — Historic Utah County Courthouse. This year, the festival’s theme was “Moving Mountains,” which symbolizes respectfully pushing boundaries. The festival helps raise funds for the local LGBTQ community. Read more here.

While Utah Sen. Orrin Hatch is 83 years old, he told the Salt Lake Tribune that he’s not going to let his age determine whether he’ll run for an eighth term. As the third oldest member of the senate, Hatch admits his age has slowed him down a bit, but he doesn’t doubt he could fulfill the responsibilities for another six-year term. Read the profile here.

Women make up 47 percent of the Salt Lake Comic Con crowd, according to organizers. Deseret News interviewed several women who make up that statistic including a woman who builds statues out of Lego bricks, a woman participating in cosplay groups and a woman who volunteers at Comic Con. Salt Lake Comic Con is from Sept. 21–23 at the Salt Palace Convention Center in Salt Lake. Read more about these women here.

Last week, United Way hosted the annual Day of Caring and Utah County residents worked to help serve in the community. Volunteers painted educational games on playgrounds, encouraged literacy in school-aged children and made repairs and updates at homes and critical nonprofit agency partners, Bill Hulterstrom, President and CEO of United Way of Utah County, wrote for the Daily Herald. Read more about the Utah County Day of Caring here.

The cast of “Everwood” — a TV show on the CW 15 years ago — reunited and nostalgically remembered its time recording in Utah. A cast of young actors, including now popular actors Chris Pratt and Emily VanCamp, filmed 88 of the 89 episodes in Utah, according to the Salt Lake Tribune. Reruns of “Everwood” are now being shown online at the CW Seed. Read more about the reunion and the casts’ memories here.