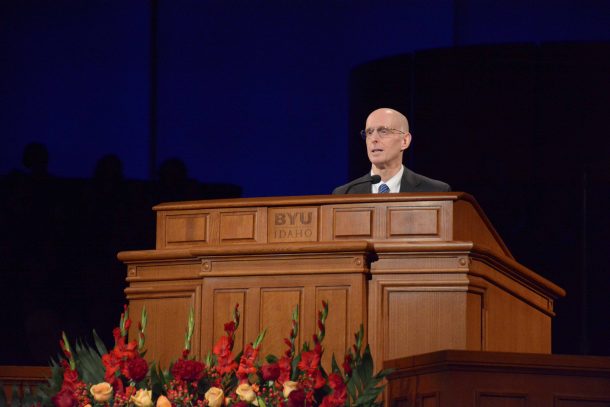 Brigham Young University-Idaho may have a new president, but alumnus of the university will find the name familiar.

On Tuesday, President Henry J. Eyring followed in his father’s footsteps with his installation as the 17th president of BYU-Idaho.

His father, President Henry B. Eyring is a former president of BYU-Idaho (then Ricks College). He currently serves as the first counselor in the First Presidency of The Church of Jesus Christ of Latter-day Saints and the first vice chairman of the Board of Trustees of BYU-Idaho.

As part of the installment, President Henry B. Eyring offered a six-point charge to guide his son’s service:

In his response to the installment, President Henry J. Eyring discussed how he wants to focus on individual students, especially those who need extra attention at the beginning of their school years.

“We must begin with both the end and the beginning in mind for these students,” President Henry J. Eyring said. “The beginning is fraught with difficulties and risks.”

“We must begin with both the end and the beginning in mind for these students. The beginning is fraught with difficulties and risks.” — President Henry J. Eyring, BYU-Idaho president

He noted some ways BYU-Idaho helps these students including I-Plan, an online tool for academic planning and individual tutoring to more than 12,000 annually.

In a media event following the inauguration, President Henry J. Eyring expanded on some of his plans for the university. One of the key indicators of the U.S. Department of Education’s College Scorecard is the six-year graduation rate of students at the university.

“Our graduation rate is around 60 percent, which is quite a lot better than the national average, but for me 60 percent is personally a painful number,” President Henry J. Eyring said. “I have five children and three are BYU-Idaho graduates. I hope the next two will go to BYU-Idaho and, if I were subject as a parent to the averages, I would now have two students in the pipeline who would become college dropouts. Suddenly, 60 percent doesn’t sound so good.”

“Getting to participate in the work of this institution as it seeks to become a respected but unique university has been the greatest professional blessing of my life,” President Henry J. Eyring said. “I’m grateful and I’m happy.”