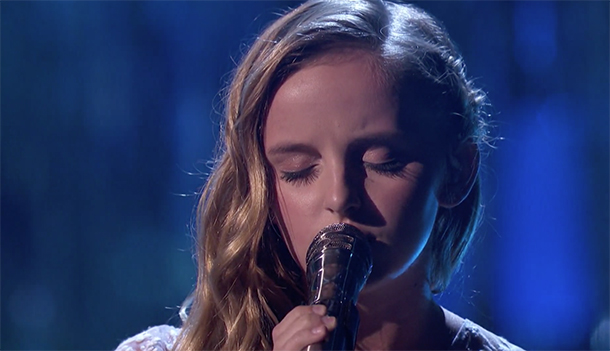 Evie Clair sings “It’s a Wonderful World” during the finals on “America’s Got Talent.” (Photo courtesy of YouTube)

Evie Clair once again showed courage and maturity beyond her years in her performance during the “America’s Got Talent” final on Tuesday night.

Paying tribute to her father who died on Sept. 7 from stage 4 colon cancer, the 13-year-old sang “It’s a Wonderful World.”

“Some of my happiest memories were my family all gathered around the piano and us all singing together,” Clair said in her introduction video. “Music brought us joy and love and brought our family closer together, even through the hardest times.”

Following her semi-finals performance, Clair flew home to be with her father, Amos Abplanalp in the hospital. He died the next day on Thursday, Sept. 7. After his death, “America’s Got Talent” judge Simon Cowell gave Clair the option of foregoing the final and instead returning the following season. However, Clair wanted to return and perform with the friends she has made this season.

“My dad was one of the bravest people I knew,” Clair said. “He always taught us to follow our dreams. My dad taught me after I started something to always finish it. That’s why I’m fighting to the end just like he did.”

“My dad taught me after I started something to always finish it. That’s why I’m fighting to the end just like he did.” — Evie Clair

Clair received a standing ovation from the judges after singing a slowed-down version of “It’s a Wonderful World.”

“Our hearts and our souls go out to you Evie,” said judge Howie Mandel. “I know your father passed this week, and I cannot believe the strength that I’m seeing in such a beautiful young girl. This is a very dark time in your life and we all go through dark times. What gets us through is hoping and praying for that light at the end of the tunnel, and your voice and your song and your presence here is that light at the end of the tunnel.”

Standing next to host Tyra Banks, Clair sniffled through the judges comments, which praised her courage during her performance.

“I’m not going to judge you,” Cowell sai. “I’m going to tell you how much I respect you, how much strength you have. This was a perfect tribute to your dad. Just the fact that it was total silence means that everyone was listening to you. Your voice was beautiful. The song was beautiful. And I’m very proud of you Evie for what you’ve just done. You’ve given yourself a shot for tonight.”

The LDS teen is one of 10 performers competing for the million dollar prize. “America’s Got Talent” will name the winning act on Wednesday, Sept. 20, at 8/7 CST.