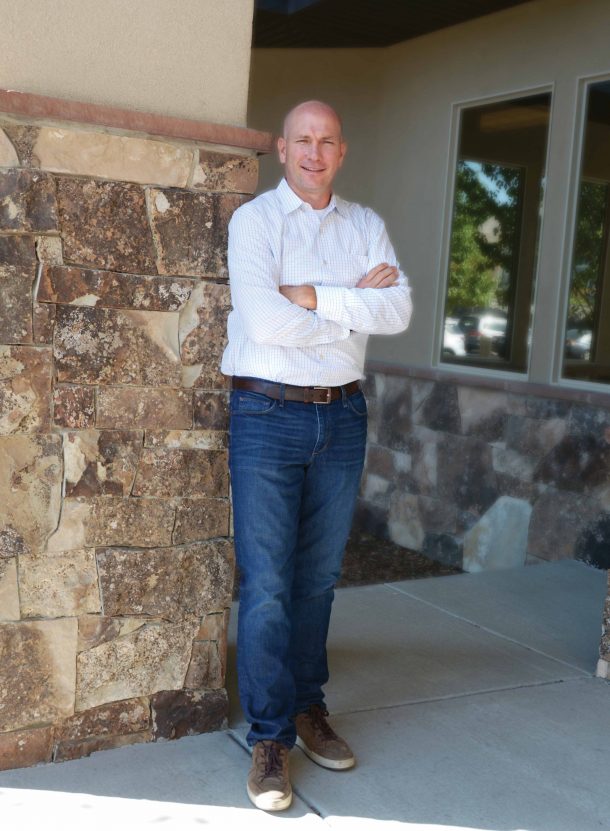 ALL IN THE FAMILY: Jacob Munns grew up with endless possibilities. “My parents taught us that we could be anything we wanted to be,” he says. “They taught us that nothing was out of reach.” Plus, he isn’t the only Munns family entrepreneur in the valley. His sister, Vanessa Quigley, is the co-founder of Chatbooks (a No. 1 UV50 Startup to Watch in 2015). (Photo by Dave Blackhurst)

As told to Briana Stewart

Boomsourcing has found its calling. After creating its Perfect Pitch technology that increases sales and customer service through scripted phone calls, the Lehi company realized it could not only help with calls, it could house the calls. Hello! And its call centers in Utah, the Philippines, and Mexico were born. That switch (board) changed the growth trajectory of the company, and today, the business formerly known as Teleserve has created over 100 million minutes of conversations for clients and offers services from customer care to operations to inside sales support. But the real ringer? It went from $100k in revenue for 2013 to more than $7 million in revenue for 2016. Boom! There it is.

I started the company when I was in business school. It was 2004, and there were several concepts we were working on. We did phone work for customers, and we struggled along for a few years finding our footing.

Then we created a software called Perfect Pitch, which is essentially a sound board with prerecorded words and phrases.

Most customers don’t want a bad accent. Some of them are concerned with compliance and adherence to a script. Others don’t want to lose money when a customer service rep starts babbling.

When a customer calls into a service center, the company typically knows why they are calling — whether it’s a shipping issue, a billing concern or what not. Our software ensures that an agent will always say the right thing and do so in a pleasant voice and a clear accent.
Ninety-eight percent of people who interact with our software have no idea they are doing so. Everything is programmed to be natural and conversational. With the press of a button, representatives have the ability to get on the call and intervene with their own voice, but those instances are extremely rare. The software is just that good.

When we created Perfect Pitch, we thought we were going to license the software to a million customers and become billionaires. But as we started to gain momentum, we realized our customers were just as interested in the outsourcing as they were in the licensing. And when we decided we were willing to do that — to own and operate call centers — that’s when the company took off.

“No one in the world wants to own a call center. Believe me. I know. It’s why I’m bald.” — Jacob Munns, founder of Boomscouring in Lehi

No one in the world wants to own a call center. Believe me. I know. It’s why I’m bald.

People still want to outsource and they want to outsource to someone who is a safe option. We are safe. We don’t brag about it. But we take care of our call center employees. They have benefits — which is extremely rare for call centers and especially rare in countries like the Philippines or Mexico. Our retention rate among our call center employees is high. They don’t want to leave.
We are a technology company that is good for people. We are in the business of humans. Automation is amazing and inevitable, but we will never replace that human touch. Businesses crave those personal interactions. We will be at the forefront of finding ways to keep people working and adding value.

Boomsourcing knows the future of phone technology is ever-changing, and it is already planning how to dial into that innovation. “There will be a big shift over the next decade from phone to SMS and social media,” Jacob Munns says. “We are innovating products in that space so that we are relevant in 10 years. All you have to do is look at our kids to see where the future is going. My kids don’t talk to friends — they SnapChat them.”

We’ve been picky about who we’ve grown with and how fast we’ve grown. We’ve been particular about clients we take and the maneuvers we make. We’ve said no to clients who weren’t a perfect fit. We could have grown a lot faster, but we would have had a weaker trajectory in the long term.

Growing this fast has been amazing. It’s validating. I’m not one of those entrepreneurs who expects success to be a given. We have worked unbelievably hard, but I’m the first to admit we’ve had a stroke of luck on our side. I’ll never deny that.

The biggest growing pain is hiring, without a doubt. That old saying of “hire slow, fire fast” couldn’t be more true. We are trying to be pickier about who we hire. But staffing in general is such an undertaking. When you care about people and helping them provide for their families, it can be emotionally wearing.

We’ll have 10,000 employees in three to four years. We are building another supersite that will employ 500 more people in the Philippines and another one in Mexico that will employ an additional 200 people. These employees are all breadwinners for their families — and 80 percent of them are women. It’s pretty special. This business is about making money, but really it’s about creating jobs.

For entrepreneurs, Utah Valley is the best place in the world. Everybody knows somebody who owns their own business, which is just not true is other places. It’s even quite different from Salt Lake. Salt Lake feels more legacy driven, and Utah Valley is more new money, new ideas. It’s such an avant-garde place to be.