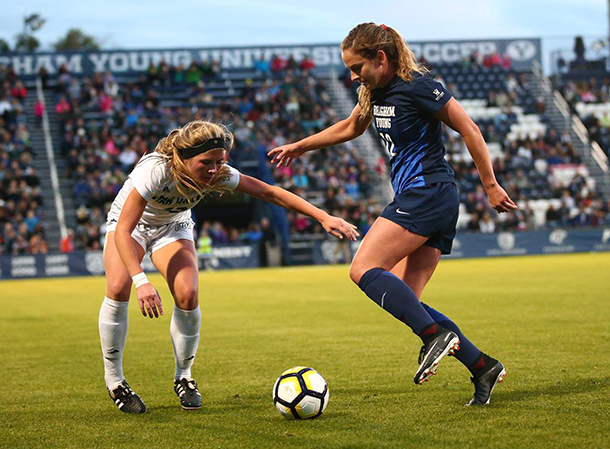 With a bye week for BYU football, soccer and volleyball took over the weekend. Here’s a look at how the BYU and UVU teams held up against their competition.

The Cougars beat the Wolverines 3–0 in the UCCU Crosstown Clash Friday night in Provo. Senior forward Nadia Gomes scored a sensational goal fifteen minutes into the game off a free kick from the right side of the goal. Curving the ball just right around the UVU defense, the ball glided into the left corner of the goal.

“We didn’t do as well as we wanted to in the first half, so we were fortunate that Nadia had an unbelievable goal,” BYU head coach Jennifer Rockwood said in a press release.

Sophomore forward Elise Flake scored the second goal for the Cougars early in the second half. Then just four minutes later, senior midfielder Bizzy Bowen scored her first goal of the season, and the third goal of the game for BYU.

“In the second half, we came out and did what we have trained to do. I thought we caused a lot of problems for UVU in the second half and were a lot more dangerous as well,” Rockwood said.

With the 3–0 victory, BYU moves to 3–4–3 and will prepare for their first conference game of the season against San Diego on Friday. Meanwhile, the loss drops UVU to 3–8 on the year. They will look to bounce back with a home game against Seattle University on Saturday.

No. 9 BYU volleyball swept San Francisco on Saturday afternoon (25–18, 25–22, 25–8) and moved to 13–1 on the season. Outside hitters Veronica Jones-Perry and Taylen Ballard led the way with 14 and 10 kills, respectively. The 10 kills were a career-high for Ballard. Outside hitter McKenna Miller helped the Cougars by notching a career-high of her own with nine kills in the match. Setter Lyndie Haddock added 10 digs, seven blocks and 34 assists in the win.

“I liked our offensive distribution today and am proud of the way the entire team was ready to play,” head coach Heather Olmstead said in a press release. “I think our blocking is getting better, so I was happy to see us get great touches.”

BYU looks for their third straight conference win as they prepare to face Pepperdine on Tuesday in Provo.

To open up conference play, the UVU volleyball team swept Seattle University on Saturday (25–17, 25–21, 25–21), ending a six-game losing streak. Senior Madison Dennison had a match-high 14 kills while senior Lexi Thompson recorded a double-double of 11 kills and 10 digs. With the road win, the Wolverines improved to 6–10 on the season.

“When you can win on the road, especially in conference play, it’s great,” head coach Sam Atoa said in a press release. “We’re thrilled that our girls came to play today and we were able to do some really good things. Seattle is a good team and this is a great accomplishment to win on their home court.”

UVU will look to keep their momentum as they travel to Arizona to take on Grand Canyon University on Thursday.

The UVU men’s soccer team lost a tough road game 2–1 against Gonzaga on Sunday. Trailing 1–0 in the first half, midfielder Diego Serna tied the game off the goal-kick assist by Elliott Rubio in the 40th minute. But in the end, it was Gonzaga who took the lead in the 70th minute with a header goal that was enough to win the game.

The Wolverines drop to 3–5 on the season but will look to snap a four-game losing streak as they return home and begin conference play against San Jose State on Friday.

“All good teams go through rough patches,” head coach Greg Maas said. “But this is a great team, and we’ll respond with a serious purpose as we look to defend our title as WAC regular season champions.”