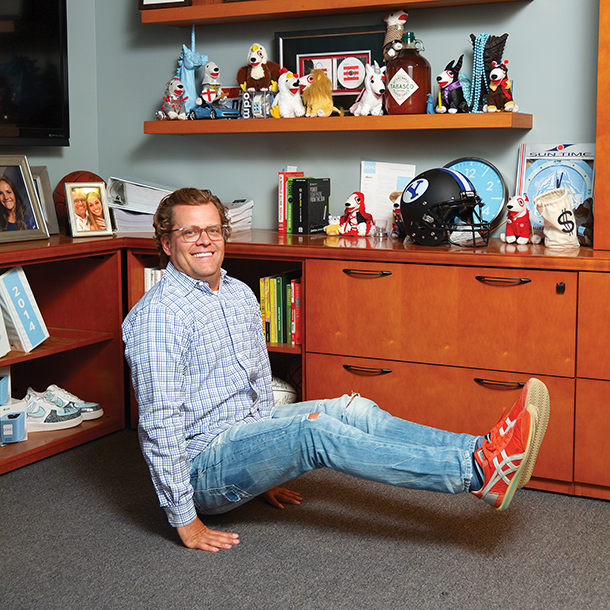 CHALLENGE ACCEPTED: Domo Founder Josh James had a grade-school teacher who said if anyone could do the “L,” they got an A for the semester. James got to work and learned how to raise his body off the ground. He’s also defied gravity with Domo, which has a confident brand largely patterned after his own persona. “I have six daughters, so a portion of our lives is devoted to shopping. I didn’t grow up with money, so I guess you could say I’ve developed my style through gross experimentation.” (Photo by Dave Blackhurst)

The CEO of Target held a fireside chat with employees and was asked his favorite book and website — and then his favorite app. “Oh, that’s Domo.” Now there’s some data. The CEO of a Fortune 50 company named an American Fork company known for its billboard sass as his favorite go-to SaaS. “That told us what we are aspiring to become is within our grasp,” says CEO Josh James.” As the only person to appear twice on the cover of BusinessQ Magazine, James first rose to fame and fortune by creating Omniture with John Pestana and then selling it to Adobe for $1.8 billion in 2009. James didn’t sit around and count his dolla dolla bills, y’all. He put on his flamboyant pants and got to work building a second team.

Sometimes I get asked if I’m happy that Adobe has done so well with what they bought from us at Omniture. I’m offended by the question. Did people think I was going to sell them a dog? We sat in front of our employees back then and told them it was going to be a billion-dollar software revenue business. And now it’s $2 billion plus for Adobe. I’m extremely happy about that.

At Omniture, we sold products to clients to improve their businesses, but the irony is I knew nothing about my own business. I used to ask for weekly reports, which turned into monthly, then quarterly reports. I had four systems that tracked my number of employees, but it would take HR two days to get it to me while they reconciled interns with part-time and full-time. I tried to solve this need just for my own company, but we never could.

When I left Omniture, the very next day I was sitting there and my phone wasn’t ringing. I started calling people, and nobody answered. I didn’t know that’s how real life was. All of a sudden I was irrelevant. I sat there for a day, and then the next day, I started Domo.

“I was planning to fund the whole thing myself and gloriously go public owning 90 percent of the company.” — Josh James, founder of Domo in American Fork

First I called my former assistant. I told her I had no idea what this is going to be. Then I called Daren Thayne who was the CTO at Ancestry, which was one of my customers at Omniture. A month after I started, I acquired Corda because they did one-tenth of what I wanted to do, and I needed a head start. We operated out of my home and my cabin. I was planning to fund the whole thing myself and gloriously go public owning 90 percent of the company. But I hated fighting the fight by myself. I started talking to VCs, and once we took their money it was off to the races. Come hell or high water, this was going to be big.

Six years later, the product is three-quarters done, and it feels like we are a $10 million startup that happens to have $100 million in revenue. It’s a giant man-child-toddler. We still need to tame the beast, but the upside is unbelievably huge. This has the potential for tens of billions in revenue.

We made a world-class company with Omniture — which was the fastest-growing public software company in the world, with the youngest CEO of a public company right here in Utah. That taught me and my team a lot of lessons. Last time, we made it to the NFL. But Domo is the Super Bowl.

“Our biggest celebrations are when we land the right people,” Josh James says. Take for example, Catherine Wong who oversees engineering for the blue-square-logo company. James did 10X more recruiting from the moment he ordered Wong’s business cards. “Having success is a byproduct of who is in the room. And I need people who are hell-bent on making a mark with this company,” he says.

I’ve learned that with a second big venture, I can’t go to the same playbook. I need people who are hell-bent on making a mark with this company. If I have too many people who have been here, done that, we aren’t hungry enough as a company. I need 40-50 percent of my team to define themselves by how successful we are as a company.

When you raise $700 million from investors, you better be successful — or move to the middle of Montana. Make that Canada. This is going to be a big company or a giant blazing hole. And everyone knows we’re here to win. Sometimes when we make a decision, there are five options. Three are safe and two are swinging for it, and we swing for it. Sometimes when we make a mistake, it’s big. But that’s part of the game we’re playing.

We have 1,000 customers including Target, Nike and Mastercard. Twenty-five percent of the Fortune 50 use Domo. That’s great validation. As an entrepreneur you have to synthesize all the signals you get, but one signal that is as true as true can be is a customer who is paying good money and excited about the return on investment.

It’s important for companies to believe they can create the next Facebook, Microsoft, Google or Tesla right here in Utah. That should be the expectation. I love living here, and we will absolutely stay here as we expand. We have a crappy little campus, but the good campus will come when the time is right.

A week ago, an employee asked what to do when you’re walking through the valley of the shadow of death and you look around and realize nobody is standing next to you. I have those moments all the time. Hashtag truth on that one. It’s what we do in those moments that define us.