Home BusinessQ Magazine Podium takes the top tier as UV50 No. 1 Startup to Watch for 2017 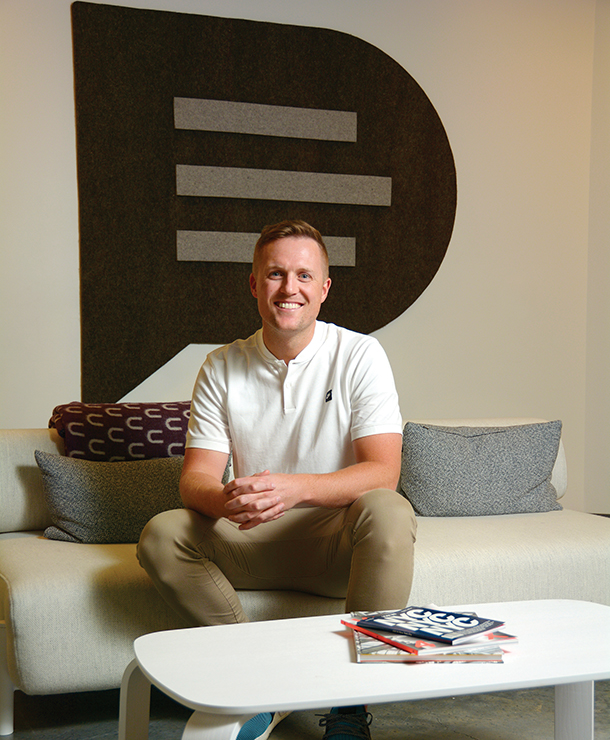 PEOPLE PLEASERS: Podium has excelled largely because of the people at the mic. “We work with smart people, we are deliberate in the way we hire, and the hiring bar is high,” says Eric Rea, Podium’s founder. “I still sit in on every single interview. Culture is that important — especially when you’re growing as fast as we are.” (Photo by Dave Blackhurst/UVBizQ)

As told by Briana Stewart

Podium is talking the talk and changing the conversation. Let’s review, shall we? The customer interaction platform that has revolutionized online reviews for businesses is now tackling every stage of customer interactions. More than 100,000 users and more than 10,000 businesses have stepped up to the Podium, including the likes of Ken Garff and Vivint Solar. The multi-million dollar company has grown to 215 employees, raised $36 million in capital and graduated from the prestigious Y Combinator program in the Bay Area. “We have a vision for where we want Podium to go, and we are committed to that vision,” says Eric Rea, founder. “Our technology is exciting for me as both a business owner and as a consumer. I can’t wait for everyone to see what comes next.”

I come from a small business family. Up in Canada, my dad owns a tire shop. And over the past 15 years, I saw the model of how customers discovered him change. It went from the Yellow Pages to Google to Facebook to Yelp. My dad ran a great business, but he didn’t know how to adapt to the way customers wanted to interact.

I knew it was a problem. I looked around and realized most small businesses were actually pretty terrible at communicating. People are busy, and when they get home and finally have time to make appointments, it’s after-hours and companies want you to leave a voicemail? Nope. Not happening.

This disconnect was the first problem we decided to solve — the story being told about these businesses online. They weren’t being accurately represented. They had no reviews, which is almost as bad as bad reviews. And if you leave it up to natural reviews, you’re only going to get polarized feedback. Some hate you, some love you … but what does the average person experience?

In 2014, I connected with a friend from school, Dennis Steele. We built some software and started selling it door to door. It took off. And it’s interesting. Today when we talk to businesses, there’s not a company out there that doesn’t realize how important reviews are. But three years ago, we were educating companies on what their reviews — or lack thereof — meant for their business.

“We didn’t need to raise money, but our growth made the VCs even hungrier.” — Eric Rea, founder of Podium in Lehi

Halfway through 2014, we raised $500,000 from a round led by Peak Ventures. I was a mid-level engineer at best. I wasn’t the person who would be able to scale the company. So we used that money to hire an engineer who could rebuild the product.

This all happened in the spare bedroom of my Provo apartment. By the beginning of 2015, there were four of us in that bedroom. My poor wife.

At that point we had only sold it face-to-face. We found an account executive, and told him if he could figure out how to sell this over the phone, he could join the company. He made a sale that first day, and we were so stoked. But the very next day that customer called back to cancel.

We weren’t having much success, and we started to think about following the Vivint model with an army of sales people. But three months later, our sales person sold $80,000 in one month.

Podium has always put the product before the pocketbook. “One policy I’m extremely proud of is our product has always been ahead of what we’re selling,” Rea says. “There’s a common practice here in Utah when you have a product that kind of works, you hire 100 sales people and no engineers. But then your product craps out, and you’re in trouble. We have always made sure we are a product company first. Our product has always done what we say it’s going to do.”

At the end of 2015, we applied to Y Combinator in the Bay Area. It’s a startup accelerator that has worked with companies like Airbnb and Reddit. It has a lower acceptance rate than Harvard! We applied by making this funny video that was definitely not meant to be funny. But we got an email anyway telling us to fly out for an interview.

We sat in the lobby waiting, and everyone else was MIT grads or international geniuses creating robotics. They asked us what we did, and we were like, “We do reviews.” (laughs)

We got accepted and moved our company to San Francisco for three months. Twelve of us guys lived in a five-bedroom house. At the end of the program, on demo day, every investor in the world is there. And we left as the highest-revenue company to ever graduate from Y Combinator. We were known as that crazy Utah sales company.

At that point, we didn’t need to raise money, but our growth made the venture capitalists even hungrier. Over the next nine months, every major VC flew to Utah and tried to pitch us on why we should raise money.

Today, our platform is so much bigger than reviews. It’s about every single way businesses interact and communicate with their customers. We have products coming out that will revolutionize the industry.

At the beginning of this year, we raised $32 million of Series A funding. We are in a position where the money is going to accelerate growth instead of just keeping us afloat. It’s so satisfying.

It was only a year and a half ago we were above a bike shop overheating in the summer and freezing our butts off in the winter. And now we have 215 employees and are breaking ground on a brand new office in Lehi. How cool is that? It’s been a fun culture of winning around here. We love to win.

Qualtrics answers as the UV50 No. 1 Economic Engine Next post