Qualtrics answers as the UV50 No. 1 Economic Engine SCRAPPY AIN’T CRAPPY: Ryan Smith leads Qualtrics with a TACOS acronym — and “S” stands for Scrappy. “In our pre-IPO company, we have to do more with less,” Smith says. “It’s a challenge to maintain that attitude, especially when natural psychology shows that people tend to run for the corners. As humans, we tend to want self-maximization, but Qualtrics has to be one team. If one person wins, we all win. It’s a game.” (Photo by Bryant Livingston Photography)

As told by Jeanette Bennett

What started as a dad and his son in a basement is now a unicorn preparing for an IPO. And while Ryan Smith (the son in the equation) now has five kids of his own, his day job is overseeing 1,500 employees worldwide — with half of them outside of Provo. Even though he travels the globe visiting his 12 Qualtrics locations, he is also decidedly “hometown.” He used the word “folks” in our interview seven times. When we began our interview, our host gave everyone at the table a water bottle. “I hope mine is spiked with Mountain Dew,” Smith quips. When Smith finished up his previously dormant BYU education in 2016, he wore his diploma around his neck for a day. “Professor” Smith and Qualtrics are the next unicorn-sized thang, folks.

We’ve doubled Qualtrics in a year and a half. We have a huge marketing opportunity in one of the biggest open markets in tech. We’re a company operating in scale — it’s fun, but it’s crazy. As CEO, my job changes every time we hire someone new.

Sometimes we bring on employees who have been at companies where other people have created the wave and they ride it. We’re creating a whole new market category. As a team, we’re creating something that doesn’t exist. There’s no playbook. Everyone inside our culture is creating. I try to bet on people during the hiring process. Sometimes we get it right, and sometimes we get it wrong. I like to invest in folks. Sometimes we have them in the wrong positions and just need to move them around. I’ve had to learn a lot of the same lessons my employees do. I have to figure out what I really like spending my time on — and what I suck at. And then I have to get good at what I suck at, or I have to lean in to an area that makes me happy. I constantly track how I spend my time. Sometimes I throw up my hands and say, “Don’t let that week happen again.” Mostly, I try to be present with however I’m investing my time.

“We defied gravity a couple different times, and now we’re doing it again.” — Ryan Smith, founder of Qualtrics in Provo

I’m glad we started in a basement and had our scrappy first-year experiences. We have had to go back and rely on those lessons a lot. It’s not necessarily the tasks or processes we remember from back then, but it’s the mindset we created. We defied gravity a couple different times, and now we’re doing it again.

Our company motto of TACOS says it all. T is for transparent. When we were in the basement, we all knew the goal and the strategy. Why can’t everyone still know the mission even though we will soon have 2,000 employees? A is All in. Customer Obsessed. One-team. And Scrappy. Customers are in the middle of TACOS because everything we do is about the customers.

I often tell my team that we all have the same key at the front door. We all have the same opportunities. A lot of people have had patience with me in my career, and hopefully we can create a culture of empathy and patience for our team members. Today, I’m feeling empathy for immigrants. I tweeted out about the 15 greatest inventions that have come from immigrants, including Levis, hamburgers, doughnuts, hot dogs. We’re all immigrants in this country. A big thing I’m working on right now with my team is unconscious bias. It’s a trendy topic, but it’s important and we’re going to be at the forefront of understanding it.

If you read the news, Qualtrics is predicted to go public in the next 12 months, along with Dropbox and others. We’re doing a lot of prep work, and we’re fortunate we can go out when we want to and when we’re ready. The second we do the IPO, everyone is a shareholder, and we want to make sure the world sees an amazing company that thrives in any economic condition.

The day this issue of BusinessQ comes out, the Qualtrics brand will have just added a 12th footprint: Paris. “I go to Europe a lot to visit our offices, but this summer we took our five kids on vacation there,” Smith says. “My wife and I both run businesses, and she reminds me regularly that it’s not always the Ryan Show or the Qualtrics show. We have to be completely thoughtful about how we spend our time and how we focus on family. My wife has access to my calendar in case I forget to tell her about something. Having a process sets us free.”

I didn’t think 2016 was going to be a year we could top, but 2017 has been crazy. I was in the Fortune 40 under 40. Forbes Cloud 100 was this year. We’re raising $50 million for cancer. We’ve got to continue building a wildly successful company or we’re not able to make a difference.

Just today I was on the phone with Angela Duckworth who wrote the book “Grit.” She’s using Qualtrics to teach kids about grit and to run simulations to see if grades improve. We are leveraging Qualtrics to make an impact on children, and it feels like we’re changing the world. We’re also trying to change the demographics of the workforce in Utah, which is incredibly difficult, but we want to be more inclusive and work with the state and ourselves on implementing a strategy.

When I sit down with other CEOs, the No. 1 thing we talk about is work-life balance and integration. I have five kids under the age of 10 and my wife runs Smash Dance Academy with 500 students. I’m trying to come up with a blend and process that sets me free to do things that are important to me.

Both of my parents have Ph.Ds. We have a rule at Qualtrics that we try not to hire people without degrees. And so I went back and finished my degree at BYU in 2016, even though it was weird sitting in the testing center at times.

Although formal education is important, I’ve never learned as much as I have this year. This stage is a euphoric rush. We’re going to have 30-40 years to talk about this run when it’s all done, whatever that looks like. I’ve watched that with the WordPerfect folks, the Omniture folks. I’m trying not to inhale while we’re in the middle of our run. I’m not Qualtrics. I’m Ryan. And I’m trying to be a steward over the opportunity as much as I can.

Podium takes the top tier as UV50 No. 1 Startup to Watch for 2017 Previous post

Pinners Conference pinned as UV50 No. 8 Fastest-Growing Company Next post 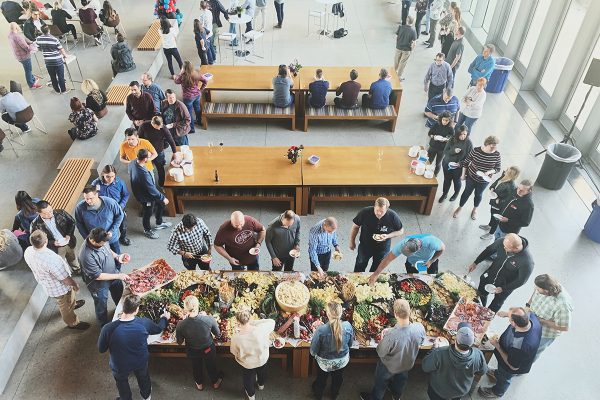 Best Companies to Work For: Adobe