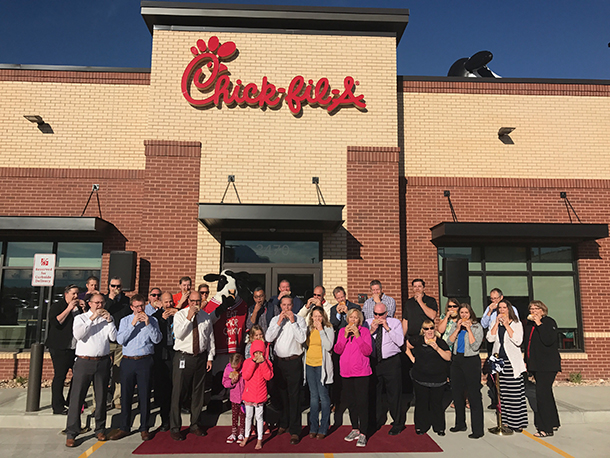 The Lehi Chick-fil-A kicked off its new location with the traditional First 100 campout, where 100 customers ages 18 and older camped in the parking lot for 24 hours in exchange for a one-year supply (52 meals) of free Chick-fil-A meals. There were more than 150 customers who showed up for the 24-hour campout, but Chick-fil-A drew names to determine the lucky winners.

Chick-fil-A’s First 100 opening contest has become so popular that people come from out of state in order to participate. However, Chick-fil-A wanted the community where the restaurant was opening to benefit from the promotion so they now require First 100 participants to reside in certain zipcodes surrounding the new restaurant.

Starting with the original sandwich, Chick-fil-A was created in 1946 by Truett Cathy. Since then, the menu has expanded from the boneless breast-of-chicken sandwich. The chain will open 117 new restaurants in 2017 with the Lehi Pointe location being the second Chick-fil-A opening in Utah this year. 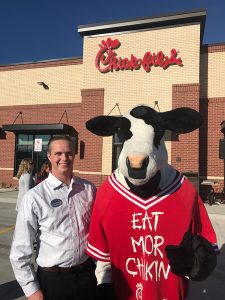 Dusty Pyne, the Lehi Point franchise owner, has been in the chicken business for years. He started working for Chick-fil-A when he was 16. Then he entered the company’s interim manager program and began managing a restaurant in Massachusetts. He moved with his family — including his wife who he took to Chick-fil-A on their first date — to American Fork, Utah in 2010.

“My team members and I have loved serving the community,” said Pyne. “We’re not jut in the chicken business — we’re in the people business. Our goal is to serve food our guests can feel great about enjoying in an environment that feels like family.”

The newest Chick-fil-A location brings 100 new jobs to Utah County, which Pyne is still looking to fill those positions. Interested applicants can apply at chick-fil-a.com/lehipointe.

The Lehi Pointe restaurant is located at 3470 N. Digital Dr. in Lehi, Utah. It is open Monday through Saturday from 6:30 a.m. until 10 p.m., serving a full breakfast menu until 10:30 a.m. Like all Chick-fil-A restaurants, it will be closed on Sunday. Learn more about the Lehi Pointe Chick-fil-A on its Facebook page.